Amethyst's Room is a room in the Crystal Temple where Amethyst lives.

Amethyst's door splits into two halves with a wavy, diagonal line and purple light which seems to have a slimy texture. Amethyst's room is at the bottom of the waterfall that begins in Pearl's room. She likes to keep her things in messy piles, claiming that this is her "System". Amethyst's room has geodes and some grass tiles. Pearl's belongings often fall into Amethyst's room via the waterfall. Some puddles can lead to other rooms, such as The Burning Room and Pearl's room, as well as a passageway to the Crystal Heart room.

Steven is chased by Amethyst out of her room and through a passage to the Crystal Heart room in order to protect the Together Breakfast.

Steven learns of the Gems' immortality to many natural causes of death. They also find an old picture of Rose and the Gems.

Amethyst and Steven play around in the puddles scattered throughout the room before sneaking up on Pearl in her room. Later on, all three capture escaped Gem Shards in the room.

Amethyst, Steven, and Garnet search for The Slinker that is loose inside the Temple. "Reformed" also marks the room's first major appearance. 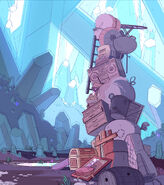 Retrieved from "https://steven-universe.fandom.com/wiki/Amethyst%27s_Room?oldid=1418701"
Community content is available under CC-BY-SA unless otherwise noted.