The "Ancient Sky Arena" is a location that is first seen in "Sworn to the Sword". It is said to be where ancient Gem battles used to take place. Pearl uses the area to train Steven and Connie.

The arena is set floating around clouds in the sky, with a Warp Pad in the front of the structure, a four colored lozenge symbol of The Great Diamond Authority behind it along with small circles (resembling the Galaxy Warp). There are stairs to the left and right of the entrance. Most of the arena is in ruin, by only a few columns are gone, as one-half of the structure is destroyed near the center. Above the entrance to the arena are four large lozenges of the same pattern, with the pink portion somewhat destroyed. As the stairs lead down to the middle arena, three statues of Gems holding weapons are seen below. The first one on the left wields a sword and appears very similar to Yellow Diamond. Her gemstone is placed on her chest. The second Gem on the right wields a spear and has her gemstone placed where her nose would be, similar to Jasper's. The third and last Gem on the far right has her gemstone placed on her forehead and wields a mace. The fourth statue of a Gem is on the far left, but cannot be made out due to being destroyed save for the legs. Below at the ruined end shows hexagon holes that look like windows. Gem writing is seen on the columns next to the statues.

Pearl mentions that some of the earliest battles for Earth took place in this arena during the Crystal Gems' rebellion against the Gem Homeworld. This was where Pearl first understood the concept of chivalry and what it means to be a knight; to be completely dedicated to a person and cause.

In "It Could've Been Great", schematics for the Ancient Sky Arena are seen on the Moon Base's computer display.

During "Steven vs. Amethyst", Steven and Amethyst hold a fight here to determine who is worse than the other. The battle leaves a fair deal of collateral damage on the arena, much to Pearl's dismay. 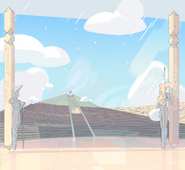 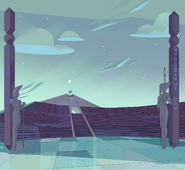 Map of the Ancient Sky Arena shown in "It Could've Been Great".