Aquamarines were high ranking Gems[1] commonly found in Blue Diamond's court. The only Aquamarine to have voiced lines thus far has been voiced by Della Saba.

Aquamarines held a high position in Homeworld's hierarchy. They were considered at least superior to Topazes, as Aquamarine was seen ordering Topaz on their mission. They do not held a specific function like the other gems, but multiple uses. They were most likely commanded directly by the Diamonds, as mentioned by Aquamarine. Several Aquamarines were seen attending the Era 3 ball, a further indication of their social status. Their role in lifting the curtains further exaggerates their "Diamond Assistant" appearance.

Later, with the heirarchy dismantles, they appear to be studious gems, based on a forehead Aquamarine intently attending many classes on Little Homeworld and unwinding with Blue Diamond.

Aquamarines are very short in stature, but they make up for it with their ability to fly with water wings, in a similiar way to Lapis Lazulis.

All Aquamarines shown have had a small blue bow in their hair, which has on one occasion proven to be a wand capable of radiate a cyan-colored tractor beam. They also all wear long skirts with a vest, as well as tights with blue shoes. As of Era 3, all Aquamarines has their wands taken away due to the new "no weapons of war" law promulgated by Yellow Diamond.

Many Aquamarines, five identical being visible (from behind), appeared in a cameo of "Legs From Here to Homeworld" cheering alongside with other Gems as Pink Diamond's Ship landed on Homeworld. 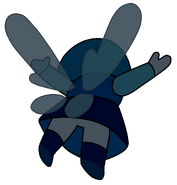 An Aquamarine is seen at the school area Little Homeschool, lifting a book while flying through the clearing. Her outfit resembles that of Blue Diamond's Aquamarine. Her gemstone is located on her forehead. She can be seen in "Homeworld Bound" on Homeworld unwinding on one of Blue Diamond's magic clouds. She appears again in "Everything's Fine" at Peridot's class as a student learning about plant horticulture.