Steven Universe Wiki
Register
Don't have an account?
Sign In
Advertisement
in: A to Z, Episodes, Season 3
English

"Barn Mates" is the 4th episode of the third season of Steven Universe and the 82nd episode overall.

Steven helps two friends get along at the barn.[2]

At the barn, Peridot is recording a log on her voice recorder detailing a scenario where she easily befriends Lapis and happily spends her time on Earth with her. After she ends the log to attempt said scenario, Lapis sternly declines Peridot's offering of friendship, surprising her. Lapis tells Steven that she did not expect to be living with Peridot in the barn, and he suggests that they divide the barn in half so that they both have their own space.

Peridot glorifies his thinking, but Lapis still refuses to live with her, stating that she would not be able to stand the sight of Peridot every day, seeing as how she forcefully dragged Lapis back to Earth. Peridot says that she simply needed an informant for the mission, but in the end, nothing worked out for either of them. Lapis exclaims that she used her as everyone else did, but Peridot tries to tell her that she is different now, with Steven's support. She tries to validate her point by stating that she betrayed Homeworld and insulted Yellow Diamond, but Lapis simply tells Steven that she will not be living with Peridot and flies off to the silo.

Steven is surprised at Lapis' resentment towards Peridot due to their past and apologizes for not getting them to cooperate. Peridot expresses her disappointment and says that things now are different from the past. She wants Lapis to understand that she is truly different now. Steven suggests that she should show Lapis the compassion that she gained during her time on Earth and offered to help her design a card. He explains that a card is perfect for communicating thoughts to someone who does not want to see the sender, and starts by drawing a picture of her and Lapis happily holding hands. After criticizing Steven's drawing style, Peridot writes a small letter of apology in the card upon Steven's instruction.

His idea is that if Peridot properly expresses her sincerity from the heart, Lapis would forgive her. Outside, they call out for Lapis and show her the card that they made together. Lapis is clearly annoyed after reading the card, which stated: "Sorry I interrogated you. You were just full of such useful information. That is a sincere compliment."

Peridot records her disappointment into the tape recorder as she enters the barn with Steven, stating that her writing elements were as sincere as they could be, blaming Steven's art for the rejection. Steven, still optimistic, suggests that she gives a gift to Lapis. They try brainstorming ideas as to what would be the perfect gift, and after bouncing around several ideas they decide to fill the hole left behind by the drill with water. Steven leads Lapis to the little pool, where Peridot floats and explains that this is perfect for Lapis, seeing as how she likes manipulating water. Lapis explains the gloomy reality of having been trapped underwater with Jasper trying to maintain Malachite for months and wants to take a break from water. Lapis flies off back to the silo, leaving Steven concerned and Peridot disappointed yet again.

Back at the barn, Steven suggests that perhaps she should gift Lapis something she likes. She is dumbfounded as to what she could give and logs her frustration before realizing that she could gift her tape recorder. She presents her wrapped gift to Lapis and explains that when she came to Earth, Steven gave her a tape recorder so she could feel better, having the ability to talk about her strange new experiences on Earth.

Lapis begins recording, sternly stating that she does not want Peridot's garbage, and destroys it. Peridot snaps and tries to explain that she fully understands how Lapis feels, being stuck on a different planet and unable to go back home, and wants to know what Lapis wants to make her feel better. She yells for her to leave, making Peridot walk off into the distance. Steven asks her why Lapis is still rejecting Peridot despite all the effort she is exerting, and Lapis replies with skepticism over Peridot's trustworthiness. He explains that he knows Peridot, and says that Lapis should've at least given her a chance before she decided not to like her.

Suddenly, Peridot runs back to the barn in terror and exclaims, "They're here!" A mysterious, red, flying spherical object appears from the clouds and focuses on Steven and Lapis. They run back to the barn to hide from it, and Steven asks Peridot what it is. She explains that it is a Roaming Eye designed to track wanted Gems. It finds the hiding gems again, forcing them to run outside. The Roaming Eye pins them, and Steven tries to protect Peridot, but Lapis steps up and uses the small pool to knock out the Eye.

The Crystal Gems arrive after the sighting of the Eye and Lapis asks if Peridot is okay. This makes her smile in happiness, which in turn makes Lapis blush. A latch on the ship opens, revealing a Ruby with a gem on her eye. 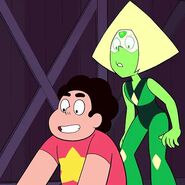 It's a Gift For You Steven Universe Cartoon Network