watch 03:27
Wiki Targeted (Entertainment)
Do you like this video?
Play Sound

Steven looks like a hero when he forms a magic crystal bubble around himself to protect a girl he likes from danger, but then panics when he can't figure out how to turn the bubble off.[2]

The episode begins with Steven walking out of the house with his bike. The view then pans the Gems discussing whether the seismic disturbances are earthquakes until they see Steven. The Gems are confused as to why he's riding a bike on the beach, but he walks off. He stops in front of a girl who's reading a book nearby. Steven then tries to impress the girl with his bike, but when he stumbles, he panics and retreats into the house to find the Gems were watching. Amethyst realizes that Steven likes the girl, and Pearl wants to set up a play date, but Garnet stops them by telling Steven to just talk to her. He agrees, but only if they do not watch next time, claiming that it will mess up his "funky flow". Steven grabs a glowing bracelet from the freezer and runs out. As Steven approaches the girl, practicing his greeting, a piece of the cliff crumbles and falls towards her. When Steven jumps to rescue her, his gem activates and encases both of them in a protective bubble that saves them at the last minute.

Steven introduces himself to the girl. She reveals herself as Connie, she thanks Steven, and asks if he can disable the bubble. He then realizes that he cannot disable the bubble. He says the Gems can help, but Steven and Connie are unable to roll up the hill. They go to the Big Donut to ask for help from Sadie and Lars. Sadie tries to break the bubble with a hammer while Lars makes fun of Steven for being trapped with Connie. Sadie tells Lars to quit being a jerk and they start arguing. Sadie then goes inside and attempts to smash the bubble with a chair, but that fails like the other attempts.

Connie and Steven later go to the pier and ask Onion to help them. Steven tries to ask Onion to use a harpoon gun to pop the bubble, but he can't hear him through the bubble or understand Steven's drawing. Connie writes backwards and Onion understands. Unfortunately, the harpoon bounces off the bubble and sinks a nearby trawler (boat). Steven and Connie then go to Funland because Steven wants to use a roller coaster to pop the bubble. Connie objects, but a tremor rolls them on the coaster's tracks. Instead of popping the bubble, the coaster launches the two into the ocean.

As they try to roll back to shore, a giant worm (which was causing the tremors earlier) appears, frightening Connie. Steven tells her it only wants to eat some nearby glowing seaweed. The worm then creates a trench which the kids fall into. Steven discovers he accidentally put his foot in Connie's face. He tries to apologize to her, but she finally explodes, frustrated that Steven does not know what he's doing and that she might die without ever making a friend.

Connie cries and Steven shows her the glow bracelet, telling her that they can be friends. He reveals that he saw her during a parade the year before but could not find her to give back the bracelet, so he kept it in case he met her again. Connie reveals she saw him last year too. As the two reconcile, the bubble finally bursts, and they make it to shore, but the monster follows them. Steven realizes the monster is chasing Connie because of her glow bracelet, so he takes and uses it to lure the worm to a nearby pier where he uses the pillars to trap and defeat her. The Gems show up and Garnet disposes of the monster's gemstone. When Pearl and Amethyst try to introduce themselves, Garnet stops them by telling them not to mess with Steven's "funky flow". Connie asks what "funky flow" is, and Steven gets embarrassed. 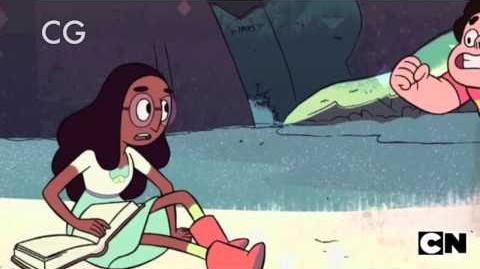 Retrieved from "https://steven-universe.fandom.com/wiki/Bubble_Buddies?oldid=1561802"
Community content is available under CC-BY-SA unless otherwise noted.