Steven Universe Wiki
Register
Don't have an account?
Sign In
in: Objects, A to Z, Games
English

View source
watch 01:28
Wiki Targeted (Entertainment)
Do you like this video?
Play Sound

"The Test"
Citchen Calamity is a game the Crystal Gems are playing at the beginning of "The Test".

The board has a blue backdrop with the words "CITCHEN CALAMITY" written across it in white print over a black text box. The board is shaped like a Monopoly board, and the squares running down the perimeter are of multiple colors, including dandelion yellow, blue, green, and yellow/blue stripes. The blue backdrop is outlined by a thick, yellow-sea orange frame. 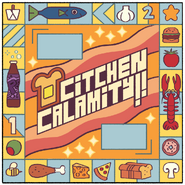