Steven Universe Wiki
Register
Don't have an account?
Sign In
in: A to Z, Characters, Homeworld Gems,
and 2 more
English

View source
watch 01:23
Wiki Targeted (Entertainment)
Do you like this video?
Play Sound

Lisa Hannigan
Comby is a comb-shaped Gem that Blue Diamond made use of when at her pool. She made her debut in "Familiar".

Comby's body resembles a purple ornate comb with a light-blue, spherical head. She wears a lavender ruff. Her gemstone is located at the center of her face, resembling a nose. Comby's eyes are entirely black, causing them to resemble pencil dots on her face.

Comby's origins are unknown, though she was presumably created by Blue Diamond to ease the loneliness from Pink Diamond's absence. Since then, she has been used as Blue Diamond's "personal comb".

When Steven arrives at Blue's pool, Blue Diamond is shown using Comby, who sings to her. When Blue Diamond stopped combing her hair, Comby stops singing, and when she expresses delight over seeing Steven again, she puts Comby away and allows Steven to get in the pool. 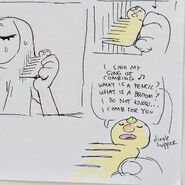