Connie in the game Sword Dancers

Holo-Connie in the game Sword Dancers 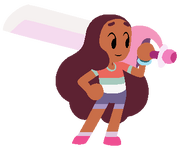 Connie in the RPG, Save the Light

Connie with shading during Steven Universe: The Movie

Connie's simplistic design, seen in Amethyst's part of "Happily Ever After" from Steven Universe: The Movie

Connie during the Season 1 Intro

Connie during "Lion 2: The Movie", "Open Book" and "Sworn to the Sword"

Connie during "An Indirect Kiss" and "Nightmare Hospital"

Connie during "Alone Together" and "We Need to Talk"

Connie in her winter coat in "Winter Forecast"

Connie in her nightgown in "Winter Forecast" and "Steven's Birthday"

Connie's yellow dress in a photo from "Full Disclosure"

Connie during the Season 2 Intro

Connie during "Sworn to the Sword"

Connie during "Steven's Birthday", without her hat

Connie's survival outfit during "Gem Hunt", when sitting down and drinking tea

Connie during "Crack the Whip" without her bracelet, and during the present time in "The New Crystal Gems"

Connie wearing a glow bracelet in "Crack the Whip"

Connie wearing a previously seen blue shirt without her glasses, from "Gem Karaoke", "Steven's Dream", "Storm in the Room", "Rocknaldo", "Are You My Dad?" and "I Am My Mom"

Connie as Steven in flashback of "The New Crystal Gems"

Connie as Steven with her sword

Connie's initial outfit from "Doug Out"

Connie as "Veronica Cucamonga" in "Doug Out"

Connie during "Lars of the Stars"

Connie's adventure outfit during "Legs from Here to Homeworld", "Familiar" and Change Your Mind

Connie in her nightgown in "Together Alone"

Connie during "Together Alone" 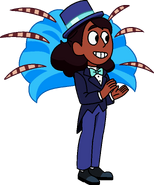 Connie with a tan shirt from In Dreams, Together Forever, and Growing Pains.

Connie with a red shirt from Everything's Fine and I Am My Monster.
Add a photo to this gallery 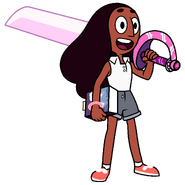 Connie at 15 years old
Add a photo to this gallery

Retrieved from "https://steven-universe.fandom.com/wiki/Connie_Maheswaran/Designs?oldid=1924052"
Community content is available under CC-BY-SA unless otherwise noted.