Cookie Cat has dark brown fur. He has one pink eye and one white eye, representing the vanilla and strawberry flavors of the ice cream sandwich. He rides a spaceship shaped like a fish that can shoot lasers. He has also been seen wearing a light pink space suit with a belt.

Cookie Cat is an alien cat who came to Earth from outer space to escape an interstellar war, leaving his home and family behind in the process. 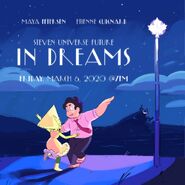 "In Dreams" promo by Maya Petersen

Cookie Cat's face on the Obsidian statue outside Steven’s house in "In Dreams".