"Pilot" (as the Crystal Palace)

The "Crystal Temple" is the base of the Crystal Gems. The house portion first appeared in the Pilot, while the interior rooms of the temple didn't appear until "Together Breakfast".

The Crystal Temple is a sacred place where the Crystal Gems live. It is their base from which they plan how to protect humanity. Inside, the Temple itself is composed of several cavernous rooms- all connected through the Crystal Heart.

Built over the entrance of the Temple is a beach house which serves as Steven's home. From camera footage in "Lion 3: Straight to Video" and a flashback in "Story for Steven", the beach house is a fairly recent addition to the Temple. According to the extended version of the theme song, shown at Comic Con in 2015, the beach house was built by Greg Universe around the time when Steven was old enough to play the ukulele. The beach house was probably built to give Steven a comfortable home as Rose's room was inaccessible at the time.

The statue on the face of the Temple has eight arms; four of the arms are spread out, the other four converge around the Temple's entrance on the figure's navel. Of the four spread-out arms, only the top-right arm still has an intact hand and the broken-off remains of the other hands can be seen sticking out of the beach sands in front of the Temple. The statue's remaining hand is currently used to launder Steven's clothes, with a washing machine installed upon it and clothes lines strung out between the fingers, and can be accessed via Warp Pad. The method in which the washing machine gets it's power is unclear, described only by Garnet as "magic".

The Temple gate inside the beach house is able to open into different places within the Temple. This is shown when Garnet, Amethyst, Pearl, and Steven each open the same gate into different rooms. Pearl even stepped out of Amethyst's room, and almost immediately reopened the gate into her own room. The way the door opens depends upon the room it is being connected to. For example, Amethyst's door has a curved line, while Pearl's is a straight vertical line with a circle around the star on the door. Only a Gem that is able to utilize their power can open the gateway.

Seen in "Story for Steven", prior to the events of the show, the Temple once had a fence surrounding the entire area. The reason for its removal is currently unknown, but it most likely got removed because of Greg Universe having to come and meet Rose. In the same episode, Greg drives through the fence, suggesting this to be the reason. 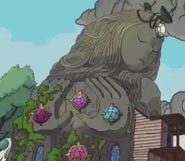 The Crystal Temple in the Pilot, then named the Crystal Palace. 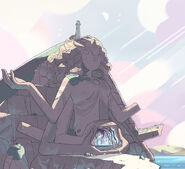 The Crystal Temple in "Story for Steven" before Steven's house was built on it.

Retrieved from "https://steven-universe.fandom.com/wiki/Crystal_Temple?oldid=449065"
Community content is available under CC-BY-SA unless otherwise noted.