Steven Universe Wiki
Register
Don't have an account?
Sign In
Advertisement
in: Locations, A to Z, Beach City Locations
English

"Lars and the Cool Kids"
Dead Man's Mouth is a location on the outskirts of Beach City.

Dead Man's Mouth is a small lake surrounded on three sides by small cliffs. There is only one opening leading to the lake, and it is marked by enormous boulders near its entrance. The lake itself is simply a small body of water with rocks strewn across it.

Dead Man's Mouth is a popular place with the youth of Beach City but left alone the majority of the time. Following the time after Rose Quartz gave up her physical form, the Magic Moss she tended worked its way into the lake and festered there for an indeterminate amount of time. After the events of "Lars and the Cool Kids", Dead Man's Mouth is now clear of the moss and is assumed to be safe for humans.

The Crystal Gems realized the danger the Magic Moss could present to humans and Pearl quarantined the area off with some police tape she had stored in her gemstone. Despite their best efforts, the rebellious "Cool Kids" decided to hang out at the lake. When they came into contact with the moss, it seemingly became aggressive. It engulfed Jenny, Sour Cream, and Buck until Lars and Steven managed to pull it out of the lake and drive it out of Dead Man's Mouth. It then transformed into blossoms on a hill nearby. 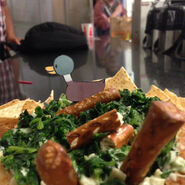 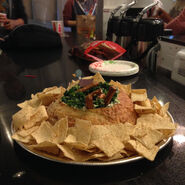