Eleanor "Elle" Michalka is an art director for Steven Universe. Originally from Texas, she began producing animations after she attended the California Institute of Arts. Before working on Steven Universe, she worked on Gravity Falls as a background painter.

Elle has been nominated for two Annie awards in Outstanding Achievement in Production Design, one in 2014 for the Steven Universe episode "Gem Glow" and another in 2015 for the Powerpuff Girls episode, "Dance Pantsed". 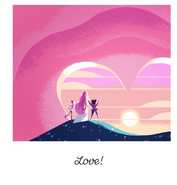 Retrieved from "https://steven-universe.fandom.com/wiki/Elle_Michalka?oldid=1974044"
Community content is available under CC-BY-SA unless otherwise noted.