Steven Universe Wiki
Register
Don't have an account?
Sign In
Advertisement
in: A to Z, Objects, Food, Magical items
English

Fire Salt is a magical seasoning containing unknown ingredients. It was first used by Amethyst to prank Steven in "Joking Victim". Later in the episode, Steven and Sadie used it to prank and get revenge on Lars for lying about his back injury, skipping his shifts at the Big Donut, and making Sadie feel replaced by hanging out with the Cool Kids.

Fire salt is an edible mix of many types of magical red powders. It is held in a translucent, reddish-pink tube with a red crystalline stopper. The tube seems to have a red line spiraling on the outside of the tube.

Fire Salt, like a real life spice, will cause a burning sensation in the mouth of the consumer. Its Scoville level, however, is beyond simple chemical combinations, so when even a grain is consumed, it will cause intolerable burns.

When Lars consumed the entire tube, the fire salt caused him to involuntarily breath fire.

Pure Gems, however, seem to be immune to the effects of the fire salt as Amethyst is seen enjoying her "special fries" throughout the episode but remains unaffected. Steven, despite being half-Gem, experiences the full effects of the salt.

As with other spices, the salt's effects appear to lessen with time or when consuming foods that can mitigate the burning sensation. Due to consuming an entire vial of salt, Lars was unable to completely counteract its effects by submerging his head in a large mound of ice cream, and was only able to recover after Steven helped him dislodge the salted donut from his throat. 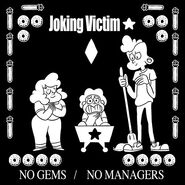 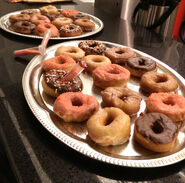 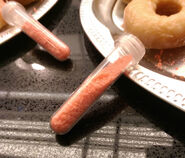