Steven Universe Wiki
Register
Don't have an account?
Sign In
in: A to Z, Episode galleries
English 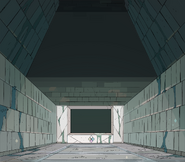 When Garnet gets mad at Pearl for attacking Holo-Peridot, Sapphire's gem is on the wrong hand.

When Sardonyx appears, her upper arms are gloved the same way as Garnet's instead of being backless, as seen in "Cry for Help".

When the Crystal Gems first arrive on the warp pad, Amethyst's gem is missing.

When Holo-Peridot first reforms after being attacked by Pearl, the lower portion of her legs and the tip of her feet have their colors switched.