"Gem Bubbles" are created by Gems to contain Gem Monsters, gemstones, and other objects, like Chaaaaps.

The Crystal Gems primarily use Gem bubbles to contain the gems of corrupted Gem Monsters, which are then teleported back to The Burning Room in the Crystal Temple. Steven first demonstrated the ability to bubble objects (and to teleport bubbled objects back to the Crystal Temple) in "Monster Buddies".

Bubbling prevents a Gem Monster from regenerating after it retreats to it's gem, trapping it indefinitely. However, bubbles typically appear to be fairly fragile, as Steven has popped them from inside and outside. In "Together Breakfast", Garnet had difficulty containing the smoke monster from the Evil Spirit Scroll, which quickly escaped once she was distracted. Nevertheless, they seem to be a stable and secure form of containment as long as they're not disturbed. Bubble color usually syncs with the gem who made it. Garnet's bubbles are red, Pearl's are yellow, Steven's are pink, and Amethyst's are purple. 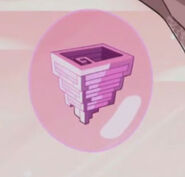 Retrieved from "https://steven-universe.fandom.com/wiki/Gem_Bubbles?oldid=459647"
Community content is available under CC-BY-SA unless otherwise noted.