watch 02:03
Wiki Targeted (Entertainment)
Do you like this video?
Play Sound

Attack the Light
Green Light (title presumed from dialogue, not official) is a plant-like Prism creature and the second boss of the game Attack the Light.

The Green Light monster is a large bright green plant like creature, with three crystal leaves on its head. There is a crystal is in the center of its face, and has a spiked back.

Green Light behaves very similarly to the smaller green planet enemies found throughout the area. It relies on poisoning the Gems and healing itself while its light duplicates do all the actual fighting. It will also heal the light duplicates should they be damaged to a critical degree. When the Green Light is defeated, the light duplicates will be destroyed automatically, so it is not necessary to attack the clones before the boss itself. 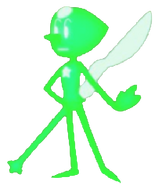 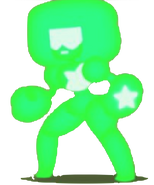 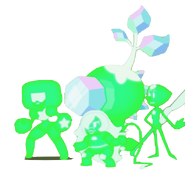 The fight against Green Light

Add a photo to this gallery
Retrieved from "https://steven-universe.fandom.com/wiki/Green_Light?oldid=1984522"
Community content is available under CC-BY-SA unless otherwise noted.