watch 03:27
Wiki Targeted (Entertainment)
Do you like this video?
Play Sound

Hellen Jo worked as a writer, storyboard artist, and songwriter for Steven Universe during the first 2 seasons. She resides in Los Angeles, California.[1]

She left Regular Show to storyboard and write for Steven Universe,[3] where she storyboarded 10 episodes with Lamar Abrams before moving on to other projects. She went on to work on Stock Quackers, GOTHBALL and an unannounced Cartoon Network project. She is currently (as of June 2015) taking a break from television work to focus on other projects, including translating Uncomfortably Happily by Yeon-Sik Hong for Drawn & Quarterly, doing advisory work for ICON 2016 and working on her own comic and illustration projects.[4]

She also works on a comic series called Jin and Jam, and is working for the second issue.[5] 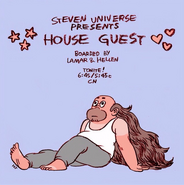 "House Guest" promotional artwork
Add a photo to this gallery

Retrieved from "https://steven-universe.fandom.com/wiki/Hellen_Jo?oldid=1948263"
Community content is available under CC-BY-SA unless otherwise noted.