"Hessonite and the Prism"

Hessonite is the main antagonist and final boss in Save the Light. She is the original wielder of the Light Prism and returns to Earth in order to retrieve it.

Hessonite is one of the tallest single Gems known in Save the Light, standing about a head higher than Garnet. She has a light orange complexion and pale yellow hair in a large curly afro drawn back to a widow's peak. She has a dark burgundy unibrow and a light yellow marking in the shape of the Prism over her left, vermilion eye.[1] She wears a sparkly, high-collared cape over an orange-red jumpsuit, thigh-high white boots with jaffa-colored soles, and white elbow-length gloves. Hessonite's gemstone is located in the center of her chest and is a rounded rectangle with a rectangular facet.

According to Rebecca Sugar, Hessonite is a pompous Homeworld commander who shows to also be vicious and aggressive when she is opposed.[2]

During her introduction at the beginning of the game, Hessonite is shown to have a high sense of self. Often looking down at others as just things beneath her. True to her title, Hessonite is very commanding of those whom she deems her inferiors, and is not opposed to treating them as tools she uses to achieve her goals. She is also very quick to anger when things don't go her way, and is reactive to doing anything that removes her opposition.

After her defeat at the end of the game, Hessonite admits that she is imperfect, so far as to even call herself "defective" because of her weaknesses. She admits that she wanted to be perfect, as everyone had told her she had to be, but she needed the Prism in order to live up to Homeworld's expectations. This reveals that for all of her imperious demeanor, Hessonite is deeply insecure, and may even feel trapped by the high standards that have been set for her.

Of further note is her reaction when she surrenders the Prism to Steven, only for him to encourage it to make its own decisions. Both surprised and touched by what she describes as Steven's wisdom, she agrees to let it be. From this exchange, it's proven that Hessonite isn't above developing respect for those who've proven their worth to her, and that she's come to view the Prism as something more than just a tool.

Ultimately, Hessonite begins to question whether she's the perfect warrior that everyone on Homeworld insists she is, or something else entirely; and she teleports away after resolving that now she has the chance to find out. With no indication that she intends to report this matter to her superiors at Homeworld, it seems likely that she may be subtly breaking away from Homeworld's rigid beliefs to discover her own path.

Hessonite first appears emerging from her inverted pyramid ship after it lands on (and destroys) It's a Wash. She rhetorically asks if the Earth "missed her." She finds the Light Steven and commands it to come with her after stating she is the rightful owner of the item. When Steven protests, Hessonite seems mildly bemused by the presence of humans and orders the Prism to attack, only to be frustrated when the Prism only produces some minor monsters to threaten Steven with.

Throughout the game, Hessonite takes the Prism to the sites of old battlegrounds from the rebellion in an attempt to restore it to its default mindset. The lack of progress frustrates her, as does the Prism's tendency to keep forming the Light Steven avatar (thus implying that it belongs to Steven, and not her). However, upon encountering the Crystal Gems, Hessonite concludes that they attempted to take control of the Prism and inadvertently caused it to malfunction. Deeming them an obstacle, she begins attacking them directly, and it's revealed that she had personally fought both Rose Quartz and Pearl back during the Rebellion.

In a series of flashbacks provided by the Prism, it's further revealed that Hessonite first received it as a reward from Yellow Diamond, to the praise and admiration of her peers. However, the Prism was more than simply a symbol of status, as Hessonite would go on to use its powers to devastating effect during the Rebellion - when weaker opponents challenged her, she would simply order the Prism to use its light constructs to vanquish her enemies for her. However, Hessonite ultimately met her match in Rose Quartz, who struck the Prism out of her hand with a decisive blow from her sword. In the end, Hessonite was forced to flee Earth without the Prism, as the Diamond Authority was preparing to use its final weapon of last resort to wipe out the Crystal Gems.

As the game's events near their climax, Hessonite discovers Bismuth's old forge, and decides to use it to "improve" the Prism. By the time Steven and the Crystal Gems arrive, the Homeworld commander has already completed her work and leaves in her ship - which, it turns out, is actually a modular component that attaches to a much larger vessel in Earth's orbit. However, the Crystal Gems use Lion to take off into space after her, ultimately boarding her warship and seeking her out for a final confrontation.

When the Crystal Gems fight their way to the bridge of Hessonite's flagship, they find her waiting for them. Taking the opportunity to reflect on how she was forced to leave the Prism behind when Homeworld's forces fled the Earth, Hessonite expresses her frustration at having to abandon it, only for the Crystal Gems to allegedly "steal it." Steven attempts to explain that the Prism doesn't serve him that way, but Hessonite refuses to listen. Angrily insisting that the Crystal Gems are nothing but thieves who stole her most valuable weapon, then damaged it through misuse, Hessonite reveals that she used Bismuth's Forge to modify the Prism back into an obedient servant. With grave satisfaction, Hessionite orders the Prism to attack, watching from her command chair as it forms a powerful Light Warrior to engage the Crystal Gems.

However, as the Crystal Gems are able to hold their own against the Light Warrior, Steven appeals to the Prism directly, asking it if it really wants to fight. When the Prism expresses hesitation and regret, Hessonite is infuriated that it still has some form of attachment to Steven, and resolves to deal with the Crystal Gems herself. Descending from her command chair, the Homeworld commander draws her sword and engages the heroes directly. Her formidable speed, swordplay, and ability to generate triangular shockwaves of light by stabbing the ground make her a deadly adversary, but the resolve and teamwork of the Crystal Gems ultimately overwhelm her.

Driven to one knee, Hessonite breaks down as she admits that it's not the Prism that's been defective all this time, but herself. While her peers on Homeworld insisted that she was perfect - that she was made to be that way - Hessonite reveals that she never believed it herself, and that she needed the Prism in order to live up to her intended role. Bitterly concluding that she's no longer worthy of owning the Prism at all after losing the battle for it, she urges Steven to take it for himself.

However, Steven surprises her by refusing to accept ownership of the Prism, insisting that it's no one's property and asking it what it wants. From here, the outcome depends on the Prism's choice. Should it decide to go with Hessonite, the Homeworld commander vows to use its power to conquer worlds. If it wants to stay on Earth, Hessonite is moved by Steven's wisdom, and agrees to let it stay. When Garnet voices her concerns about releasing such a high-ranking commander in Homeworld's army, Hessonite admits she's beginning to have doubts about her role in life - the perfect warrior Homeworld claims she is, or something else altogether. Resolving to find out, she departs without further incident, or indication that she intends to report the matter to Homeworld. 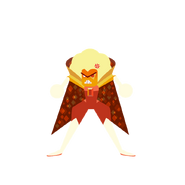 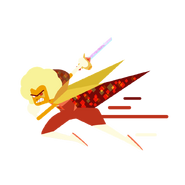 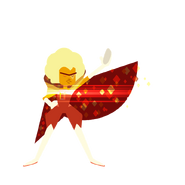 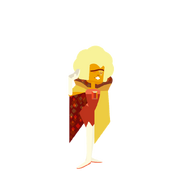 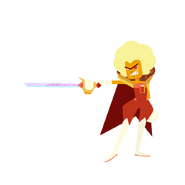 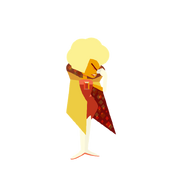