Steven Universe Wiki
Register
Don't have an account?
Sign In
Advertisement
in: A to Z, Episode galleries
English

< Hit the Diamond
View source
watch 02:56
Doctor Strange in The Multiverse o Madness - The Loop
Do you like this video?
Play Sound 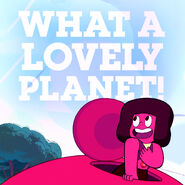 Hit the Diamond promotional image from the CN Tumblr. 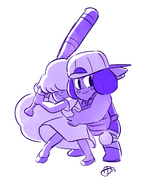 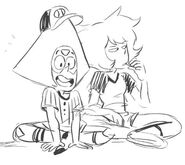 [PLOT] [05:18] Steven's glove is on his left hand when he is pitching. It switches to his right when he tags out Eyeball.

[PLOT] [08:20] After Sapphire freezes the bat and hits the ball, all the ice on the bat disappears.

[DESIGN] [02:22] Ruby's gem is missing when Doc is suggesting that the Rubies should check the barn.

[DESIGN] [04:57] Ruby's gem is missing when Army punches Ruby after she strikes out at the start of the game. 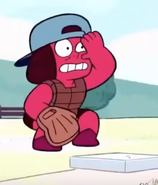 [DESIGN] [05:33] As Amethyst begins to spin dash around the bases, Ruby's hand is backward.

[DESIGN] [08:13] Ruby's gem is missing while Ruby watches Sapphire hit the ball at the end of the game.

[DESIGN] [08:40] After Ruby's hat falls off when Sapphire jumps into her arms, her headband is nowhere to be seen.

[DESIGN] [09:07] After the Homeworld Rubies fuse, the Ruby fusion's gem on her eyeball is rotated such that the cut appears as a diamond instead of a square; however, the fusion may simply be able to rotate the gem.