"Storm in the Room" (mentioned)

The Hospital is a location that first appeared in "Nightmare Hospital". Connie's mom, Dr. Priyanka Maheswaran, works there.

The Hospital consists of a central circular building with two rectangular wings off to the sides. It is a gray, multi-story building with the main entrance leading to the center and two additional entrances located at the end of the wings. The floors are patterned with white, gray, and black tiles. After dinner, most of the lights in the building are turned off or dimmed to conserve electricity.

Within the two wings are rooms for patients. Each room has a window facing toward the hallway. Every room has a bed for the patient that can be concealed using a curtain that hangs from a bar connected to the ceiling.

Dr. Stromberg is a doctor who works at the hospital. They were in charge of treating one of the Cluster Gems and is the person who calls Dr. Maheswaran to tell her that another Cluster Gem was found.

Dr. Stromberg is mentioned again by Dr. Maheswaran in "Storm in the Room", in which the latter states that she had to cover for one of Dr. Stromberg's patients again.

Dr. West is a doctor who works at the hospital and is mentioned by Dr. Maheswaran.

Dr. Gero is a doctor who works at the hospital. Steven and Connie walk by their office while trespassing through the hospital.

In "Nightmare Hospital", two Cluster Gems were taken to the Hospital, assumed to be car accident victims. They are poofed and bubbled by the combined efforts of Steven and Connie.

In "Gem Hunt", the hospital and the events that transpired in "Nightmare Hospital" are mentioned.

In "Storm in the Room", Dr. Maheswaran is late to pick Connie up, mentioning that she had to cover for one of Dr. Stromberg's patients again. 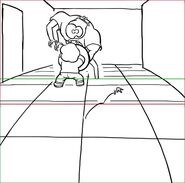 Retrieved from "https://steven-universe.fandom.com/wiki/Hospital?oldid=1849071"
Community content is available under CC-BY-SA unless otherwise noted.