View source
watch 03:36
Wiki Targeted (Entertainment)
Do you like this video?
Play Sound

Pearl tries to safely bubble a Gem and send it back to the temple, but it doesn't want to cooperate. On the other hand, Steven wants the Crystal Gems to take a day off and relax.

The Crystal Gems are battling a corrupted gem near an unidentified beach. Upon its defeat, Pearl bubbles the Gem. When she attempts to send it to the Crystal Temple, however, she fails. She suggests they carry it back as soon as possible, but Steven insists that by leaving they would be missing out on the beautiful weather of their current location. He adds that Beach City is very disappointing today.

Back in Beach City, Peedee films Ronaldo for his blog. Ronaldo exclaims that it is still raining, and asks his viewers if they have ever thought about adopting dogs or cats, which seem to be in abundance in Beach City.

At the unnamed beach, Steven states that the Gems did not get a chance to wear the new "shades" he got for them, New Year's glasses, enforcing his idea to stay at their location for some time. Pearl disagrees, but Steven insists that the gems work hard and deserve a day off. He says, "Doing nothing for a little too long is a very important part of being a human". Amethyst quickly agrees, but Pearl says otherwise, the gems are not humans. Garnet tells Steven that, because it is important to him, the Gems can try to relax. She tells Pearl that they can take turns carrying the bubbled gem, but Pearl says that she will do it herself and that she does not need help.

Seeing an opportunity to annoy her, Amethyst shapeshifts into a gigantic and muscular version of Pearl. She attempts to grab the bubbled gem but is instead stabbed by Pearl's nose. Amethyst hits her in retaliation, causing the bubble to pop and the gem monster to start to reform. Pearl refuses to let go of the gem, even when it is completely reformed. Amethyst shifts into a bird, both as a way to escape the monster and make fun of Pearl's nose. Before she can flee, the corrupt gem hits her with a nearby pillar. Steven tells Pearl to let go of the gem, but she refuses. The monster starts attacking her. Amethyst returns, now wearing a full set of armor and wielding a sword. Unable to defeat it, Garnet calls for the team to regroup. The gem monster sprouts three additional arms, chasing Steven, Amethyst, and Garnet in opposite directions.

Garnet fights off the arm with a statue. The arm following Steven steals the glasses he brought for the gems. Amethyst shifts into an ostrich to escape. She picks up Steven, who tells her that she should stop making fun of Pearl's nose. Amethyst explains that her nose would not make sense on an ostrich. They accidentally crash into Pearl, who is still holding onto the gem, and defeat the monster in the process. While bubbling the gem, Pearl says, "Well that was fun, but play time is over". Amethyst and Steven race to the ocean, much to Pearl's dismay. Garnet tells her to let them go, stating that Pearl has earned some quiet time back at the temple. Thunder roars as Steven and Amethyst relax on the beach. They both scream that the "cloud monster" is back, but Pearl assures them that it is just rain. As they run off the beach, Steven cries that his beautiful day is ruined.

Lars and Sadie leave a Beach City Underground Wrestling match as the crowd cheers for Purple Puma and Tiger Millionaire. Lars exclaims that Tiger killed it tonight and Sadie agrees. She tells him that she never expected to enjoy wrestling as much as he does, but Lars tells her that he knew she would love it. Lars continues to walk, but Sadie tells him that home is in the other direction. He tells her that he knows a shortcut and she follows.

The duo climbs under a tree, over some bushes, and swims through a lake. They come to a sign that states "Now leaving Beach City" and Sadie calls for Lars, who continues to walk forward. They eventually end up in someone's backyard. Finally, they return to the Abandoned Warehouse. When Sadie points out that this is where they started, Lars yells, "I know where we're going I just need to find it!".

Steven cannot decide if he wants to eat a bagel or a hot dog. He has the idea to mix the two together, creating the "Everything Bagel Dog". He gathers the ingredients: a bun, a hot dog, cream cheese, scallions, poppy seeds, garlic powder, dried minced onion, sesame seeds, and salt. He heats the hot dog over a fire, toasts the bun and puts cream cheese on it, then adds each topping. While eating it, he wonders if he should add hot sauce.

The day of Steven's birthday, Greg Universe enters the Beach House and asks the Crystal Gems if they remembered to pick up Steven's cake. Pearl states that she completely forgot, and Greg explains that he has Steven distracted at the Funland Arcade and that the Gems should have enough time to bake a cake. Pearl says that they can try, Greg then leaves. Garnet asks Pearl and Amethyst if they have ever cooked before. Amethyst replies that it cannot possibly be hard since humans do it all of the time.

Amethyst adds donuts, cookies, cream, and popcorn to a bowl and puts it in the oven. When it comes out, it looks nothing like a cake and is burnt. Pearl explains that one cannot just use candy to make a cake. She explains that baking is a complex mixture of chemical reactions. She adds yeast, vinegar, screws for iron, and chalk into a bowl. The "cake" explodes in the oven, much to Pearl's confusion. Amethyst tells her that even she knows one cannot put metal in a cake, and the two start to argue. Garnet tells them to stop and shows them that her cake is finished. Steven runs into the house and asks to try Garnet's cake. He looks at his slice and asks her if it is just icing. She replies, "Yes," to the shock of Greg, Amethyst, and Pearl. Steven, ecstatic, exclaims, "Awesome... I love icing!" Pearl is frustrated. Amethyst enjoys the icing as well. 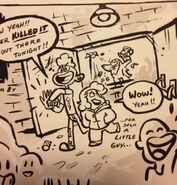