"Issue 1" is the 1st issue of the 2017 Steven Universe comic series published by KaBOOM! Studios and the 9th issue overall.

Steven, Lapis, and Peridot rescue a baby songbird on the ground outside the barn and work together to reunite it with its mother.[3]

The comic begins with Steven showing Lapis and Peridot a mobile game from the Crying Breakfast Friends! franchise. They hear cheeping, and Lapis asks if breakfast foods cheep, prompting Steven to say it is not coming from the game. They search for the source of the cheeping and Steven finds a baby bird sitting in the grass. He asks Lapis if she can help him find its nest and the pair search around the area of the barn. Despite their goal to find the baby bird's nest, they only find a nest whose eggs had been eaten by a snake and a nest with an unnamed bird Gem monster sitting in it (to which Steven asks Lapis to remind him to tell Garnet of later).

Lapis and Steven head back to the barn for a bit and Lapis suggests they call an 'ugly baby expert'. Steven searches the internet for one and finds the Empire City Wildlife Rehabilitation Center. A monotonous employee picks up the phone and Steven describes the situation. She tells him to identify the species of the baby bird, as the center does not take in common songbirds since they are not endangered and thus a waste of resources. The trio does not know the species of the bird, so they forgo bringing the bird and ask what they can do instead. The employee advises them to put it in a basket lined with paper towels and leave the basket outside so the bird's mom may find it and take it back in.

The next morning, Steven wakes up to see that Lapis had brought the basket back inside the barn and is feeding the baby bird. Initially excited that they all get to raise the bird, Steven subsequently has a moment of panic realizing that they are breaking the law by raising wildlife without a permit. Lapis reasons that they are already rebels and Peridot mentions that, with enough nutrients, they can transform it into a larger, more powerful bird to do their bidding. Lapis points out that the baby bird's eyes have opened and Steven excitedly decides to name the bird Susan.

Steven, Lapis, and Peridot care for Susan until they have gotten big enough to fly. Peridot, however, is disappointed as Susan is still not big enough to go on missions for them. She orders Susan to bring her a rotary drill and Susan cheeps angrily, then flies to the window and pecks it. Steven and Lapis realize that it is finally time for Susan to "leave the nest", so the three bring Susan outside to fly away, and Steven tearfully tells them that, if they need it, they will always have a home at the barn.

The next day, Steven asks if Susan has returned yet. Peridot angrily replies that Susan has not, despite everything they did for the bird. Lapis interjects and asks Steven to help her water the garden but instead leads him in the opposite direction, to the back of the Barn. She tells him to hold out his hand then proceeds to place a worm onto his palm. The comic ends with Susan suddenly landing in Steven's hand to eat the worm, then flying away with many birds of the same species. 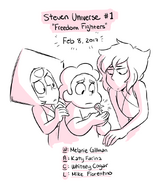 Promo by Katy Farina
Add a photo to this gallery 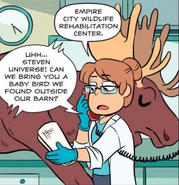 Retrieved from "https://steven-universe.fandom.com/wiki/Issue_1_(2017)?oldid=1864998"
Community content is available under CC-BY-SA unless otherwise noted.