Steven Universe Wiki
Register
Don't have an account?
Sign In
Advertisement
in: A to Z, Issues, Merchandise,
and 2 more
English

"Issue 2" is the 2nd issue of the 2017 Steven Universe comic series published by KaBOOM! Studios and the 10th issue overall.

When Steven and Connie fuse into Stevonnie to sneak into a PG-13 film, they run into Kiki and agree to take her to the prom![1]

The comic begins with Connie and Steven walking to the movie theater to buy tickets for a movie adaptation of "The Unfamiliar Familiar". They are soon told that, because the movie is PG-13, they cannot get in without an adult. Connie then notices a poster for the movie that shows Lisa and a humanoid Archimicarus with abs and begins to complain about how it deviates from the books by ruining the platonic relationship between the two. At the end of her complaint, she admits that she still wants to watch the movie if only to see how bad it is. Steven tells her that there is still one way they can get in.

Stevonnie walks to the counter and asks Jane for one ticket to "The Unfamiliar Familiar". They are told to show their ID and Stevonnie hands over Connie's middle school ID. Their ID is deemed invalid, and they walk away angrily and soon bump into Kiki. After helping Kiki up, Kiki tells them that she was just out on a run to avoid shopping for prom clothing. Stevonnie notices a nearby clothing store and excitedly asks Kiki if they can go shopping there with her. After agreeing, the pair walks to the store.

Inside the store, Stevonnie excitedly tries on multiple dresses and suits with Kiki, much to her initial dismay but eventually eased into it and had fun with Stevonnie. After this spree, Kiki asks Stevonnie if they want to accompany her to the dance. Having never been to a school dance, Stevonnie agrees to go immediately and tells Kiki that they will be there at seven and that "it's a date."

At the Beach House Connie and Steven are preparing for the dance. Connie starts to list off things that they will need based on '80s teen romance movie tropes. She realizes that they will need a chaperone for the dance as well and Steven tells Pearl that he has an important mission for her and her tux. Pearl gets her tuxedo on and brings Stevonnie and Kiki to the Big Donut for a quick snack. Afterward, they arrive at the prom.

Kiki offers to introduce Stevonnie to her friends, and they awkwardly stand to the side when Kiki's friends invite her to dance but not them. Kiki notices and invites Stevonnie to dance, prompting Sour Cream to play a slow song. During their slow dance, Kiki mentions that she has had a lot of fun with Stevonnie and that they should hang out again. Realizing that she means on a date, Stevonnie panics and flees.

They run to the bathroom and defuse. Steven and Connie start to panic, with Steven saying that they should have told Kiki who they are right from the beginning and that she will hate them if they tell her the truth now. Connie agrees, asking how they were supposed to tell Kiki that Stevonnie is two kids fused together. She goes on to say that the whole time they have been trying to act how Kiki would want them to, but have not told Kiki what they want to do.

Back at the dance, Kiki is sitting sadly on the bleachers. Stevonnie approaches her and admits that they think Kiki is amazing and would love to hang out with her again — but as friends only. Kiki replies that that sounds great and the issue ends with Stevonnie offering to take Kiki to see "The Unfamiliar Familiar" the next weekend. 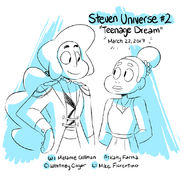