A Day With Onion

Steven and Connie tries to raise money in a yard sale so they can build a library, but Pearl has other plans.

The comic starts off with Steven playing with his video games and Connie reading one of her books as she watches Steven. Connie tells Steven that Beach City doesn't have a library anymore. Steven has idea that they should raise money for a new library. Connie finds the idea marvelous and heads out with Steven to rummage Greg's U-Stor garage to find the junk they need.

They later come back to the temple, Connie has an idea to make fliers for the yard sale. As they are making fliers, Amethyst comes and comments about the mess but Connie says it's for a good cause. Amethyst then tries to fall asleep but Connie says that if Amethyst is going to stay, she needs to help make the fliers as well but Amethyst quickly leaves, not wanting to make fliers. After they're done, they start posting the fliers around Beach City. Pearl discovers the mess in the temple and tries to clean it up but Garnet says that she is needed on a mission. Pearl doesn't want to leave the mess and absorbs the junk into her gem. Pearl and Garnet then leave for their mission.

Steven and Connie later, back to temple, discover the junk they took from Greg's storage is gone, Garnet then bursts through the door, carrying a sick Pearl who then sneezes a clock from her gem. Garnet wants to know what they are selling. Steven replies that they were selling usual things. Steven says that he thought having a cracked gem makes a gem sick. Pearl says she couldn't possibly be sick and wants to go back to the mission only to sneeze out more junk from her gem. Garnet then says that since Steven started this, he's going to have to end it and tells Connie and Amethyst to take care of anything Pearl may throw up. Steven and Garnet are then absorbed by Pearl's gem. In Pearl's Gem, they see that a yellow strip going around notice items in her gem. Steven realizes that he is floating. TO BE CONTINUED!

Steven tries to activate his shield but it doesn't seem to be working. Amethyst asks what causes the shield to come out and Steven says it usually comes out whenever he's in danger. Amethyst then goes to her room and Steven goes make a sandwich. Before Steven can go and finish making his sandwich, Amethyst frightens Steven by wearing a mask and surprising him, this activates his bubble and he can't finish making his sandwich, much to his dismay.

Connie goes to Steven's house asking for him, but is instead greeted by Garnet and the other Gems. Connie explains to them that she and Steven were supposed to read the Dogcopter novelization that day. Pearl tells her that he will be back soon, and offers Connie some apple slices while she waits. Connie refuses, saying that Steven is probably getting donuts. She is interrupted by Amethyst in cat form, much to Connie's surprise. Garnet explains that Amethyst is stuck as a cat due to dropping the Eternity Chalice at the Alter of Learning, which they have to return. Pearl assures Connie that Amethyst is fine and warns her to not touch the space slime. She says that Steven will return soon, and the four wait in awkward silence until he arrives with the donuts. Connie rushes to him while Pearl sighs in relief.

A Snowbeast is causing it to snow in the month of July. Excited, Steven asks the Gems to wait so that he can gather his snow gear. While he is indoors, the Gems proceed to battle the Snowbeast. Once it is defeated, Steven finally goes outside hoping to enjoy the snow, but is instead met with a sunny, snow-free beach. He asks if they can at least have hot cocoa.

Steven finds Onion sitting on the pier with a basket of fry bits. He observes Onion throwing the bits into the ocean. Inspiration strikes Steven, and he leaves, promising to be right back. Later, Steven is sitting with Onion, now dressed similarly to the other boy and with his own basket of fry bits. They throw bits together with Steven happily exclaiming "I get it now!". 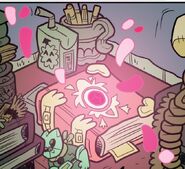