Steven Universe Wiki
Register
Don't have an account?
Sign In
Advertisement
in: A to Z, 2017 Comic Series, Merchandise,
and 2 more
English

"Issue 6" is the 6th issue of the 2017 Steven Universe comic series published by KaBOOM! Studios and the 14th issue overall.

Noticing Pearl's temper has been unusually short lately, Amethyst invites her to blow off some steam by joining her to fight tag team at the Beach City Underground Wrestling Ring.[3]

The comic begins by showcasing a series of frustrations for Pearl. First, she trips over an attack by a Tentacle Monster. She goes on to have a tense conversation with Peridot, discover Amethyst getting pizza on the couch, and catch Lion chewing on fresh laundry.

Pearl warps to the Ancient Sky Arena in hopes that a training session with a Holo-Pearl will calm her nerves. This ultimately fails when she is quickly disarmed by the hologram which only serves to frustrate her further.

Now inside the Beach House, Pearl slumps onto the couch in defeat. Steven, Amethyst, and Garnet join her to express their concern at her current state. She explains to them that nothing has been going her way all week and that she doesn't know what to do with her pent up frustration. Amethyst muses that whenever she used to feel that way, she'd blow off some steam by wrestling. She pitches to Pearl that perhaps the two could tag team as a potential means to relieve Pearl of her stress.

Steven is quick to jump onto this idea and suggests that they come up with a wrestling persona for Pearl. The aforementioned worries about using Gem strength on humans but she is swiftly reassured by Amethyst that the humans are there because they want to fight. Garnet approves of the idea - if wrestling worked for Amethyst, it may also work for Pearl. With this encouragement, Pearl decides to give it a try.

After briefly explaining to Pearl the purpose of a secret identity, they decide that Pearl will become 'Peach Panther', a former rival of Purple Puma turned ally after discovering the struggles they have in common. Pearl is given pink cat ears, a yellow mask, and a pink leotard to complete this identity.

They arrive at the Abandoned Warehouse with Mr Smiley serving as the announcer. He introduces Purple Puma and Peach Panther as a tag team duo, with the former briefly explaining the rules of the ring to the latter. Their first match is against the Wolves of Wallstreet. Purple Puma takes down Howl Jones with ease, however Peach Panther does not participate in the match and instead opts to explain to Billy Bank Assets the benefits of investing in the stock market.

After dispatching the remaining opponent, Purple Puma confronts his partner and tells her that she can't stand there and talk to her opponent. Peach Panther retorts that she's new to wrestling so Purple Puma suggests that she pretend her opponents are the source of her built-up frustrations.

Peach Panther takes on Chunk Truck and is pinned down. She almost admits defeat but is able to defeat her opponent after some encouragement from her tag team partner. Purple Puma is then tagged in to beat Concrete Heat.

The duo enters their third and final round of the night against the Good-Looking Gang. They work in tandem until Dashing Danny Doober knocks them both down by throwing Peach Panther into Purple Puma, with the former encouraging the latter to get up and fight. With their newfound adrenaline, the two are able to knock down their opponents. As they're about to deliver the final blow, the Good-Looking Gang dodges at the last second and uses Purple Puma's and Peach Panther's inability to recover to defeat them.

Although sore and defeated, Pearl admits that she's starting to feel better and had fun wrestling with Amethyst. Steven and Garnet compliment the pair as they all walk back to the Beach House and the comic ends with Pearl suggesting to Amethyst that they use their new moves on their next mission.

Grace Kraft's pitch for the comic.

Script for the comic. 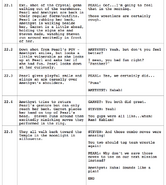