Lapis Lazulis are Gems who have hydrokinetic abilities and were formerly used to terraform planets for colonies. All known Lapis Lazulis have been voiced by Jennifer Paz.

Lapis Lazulis were very valuable to Gem Empire because of their powerful hydrokinesis, and also were among the common elite on Homeworld. They are primarily used for terraforming potential colonies with their hydrokinesis, as mentioned by Yellow Diamond.

Lapis Lazulis are terraformers who reshape alien planets to be more suited for Gem production and colonization. From what has been shown Lapis Lazulis are incredibly powerful Gems, being capable of moving entires bodies of water with such force that it easily cuts through thick layers of rock. It is likely that this is how the canyons for Kindergartens are created, and how a planet's landmasses are reshaped by Homeworld during colonization.

Lapis Lazulis are slightly shorter than Pearls, and are very humanoid in appearance, with their blue colored skin and gem being the only indication that they are extraterrestrial.

Homeworld Lapis Lazulis are barefooted, and wear a cropped sleeveless top with a long skirt that goes just below their knees. The diamond insignia is either placed on the collar in a similar way to the most common Homeworld uniform, or split in half over the front of the top and skirt. 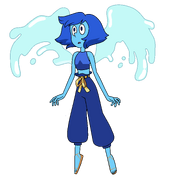 The silhouette of a Lapis Lazuli (presumed) with a gem on her upper back can be seen at the Cloud Arena among other members of Blue Diamond's court. It is very likely that this is the Crystal Gem Lapis, as the appearance is almost identical and she would have been on Earth at this time, but it has yet to be confirmed.

A Gem that is presumably a Lapis Lazuli can be seen in a crowd of Gems that watched Steven's broadcast.