Lemon Jade is a fusion of two different Homeworld Jades.[1] She and her components debuted in "Together Alone", at "Pink Diamond's" Era 3 Ball. They fuse after they see Stevonnie, Garnet, and Opal form, and are subsequently poofed by Yellow Diamond.

The Jade component Gem shown on the left (with the right cheek gem) has a greenish-yellow hue. Her hair is styled in two upward spikes. She wears a floor-length dark yellow dress with light green shoulder pads and a Yellow Diamond insignia in the shape of the triangle located on her chest. Her gemstone is located on her right cheek.

The Jade component Gem shown on the right (with the left cheek gem) has a minty-green hue. She wears her hair in a downward bob cut. She wears a green floor-length dress with dark green stripes along with a minty green shawl with a Blue Diamond insignia on the front. She also wears a pair of wrist-length gloves. Her gemstone is located on her left cheek.

Lemon Jade has a light green hue and is (like any other fusion) larger than the sum of her parts. She looks similar to her components except she has four arms that meet together at her forearms, six fingers on each hand and four eyes. Her hair is light green and is styled into spikes on top and is messy on the bottom. She also has a gap in between her teeth. She wears a green dress with puffy sleeves and dark green stripes located on the skirt part. Along with that, she wears a dark green shawl with Yellow and Blue Diamond insignias located on the trim. She also wears a pair of dark yellow boots with blue rings located on the ankles. Her gemstones are located on both of her cheeks.

Their personalities are currently unknown. However according to their mannerisms the one on the left (with the right cheek gem) is shown to act more casual and flowy, while the one shown on the right (with the left cheek gem) acts more mature and sensitive.

Lemon Jade appears to have a very cheerful personality. She also appears to be very brave, as she doesn't seem to hesitate to reveal her relationship in front of the Diamonds in order to stand by Stevonnie.

Both Jades are in attendance at "Pink Diamond's" (Steven's) Era 3 Ball. After the Gems reveal themselves and fuse, the Jades fuse as well, expressing their joy that there are other fusions like them. Their moment is short-lived, however, as Yellow Diamond poofs them moments later.

The Jades possess standard Gem abilities and traits. The abilities available to their fused form Lemon Jade is currently unknown.

Despite their opposing personalities being a source of friction between them, the Jades appear to have a very strong relationship with each other.

Storyboard by Rebecca Sugar.
Add a photo to this gallery 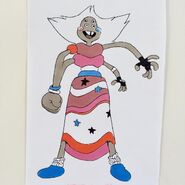 Original design for Lemon Jade by Tom Herpich.
Add a photo to this gallery

Retrieved from "https://steven-universe.fandom.com/wiki/Lemon_Jade?oldid=1787809"
Community content is available under CC-BY-SA unless otherwise noted.