Steven Universe Wiki
Register
Don't have an account?
Sign In
Advertisement
in: A to Z, Objects, Technology,
and 2 more
English

Limb Enhancers are mechanical tools crafted on the Gem Homeworld and given to Era 2 Peridots who lack powers, as well as gems who are not their intended height, such as Amethyst.

They were formerly worn by Peridot. She wore them throughout most of her early appearances, and were confirmed to be separate body parts from her physical form in the episode "Catch and Release". The limb enhancers (excluding her left foot, which Steven returned to her in "Catch and Release") are currently lost underwater near the Galaxy Warp, after having been disposed of by Amethyst by being thrown into the water. Without them, she is harmless, as said by Pearl.

Demantoid, an Era 2 Garnet, wears limb enchancers as well, to compensate for her short size. However, unlike other limb enchancers, they have been modified by her to the point where they almost resemble a mech of sorts.

The arms can create a tractor beam (used to levitate broken Warp Pad pieces, and other Gems), and also fire blasts of plasma.

In order to charge the plasma cannon, the other four fingers must be locked in cardinal directions, while the fifth finger is in the palm position.

The palm portion, as seen here, can be used to create a tractor beam and levitate objects.

Peridot, using the plasma cannon to escape the Crystal Gems.

The fingers can create a screen, shaped by four fingers and operated with one. This can be used to operate machinery such as the Gem Warship by tracing different lines on the screen. The fingers also can generate jolts of electricity and were also seen to rotate like helicopter blades. The touchpad can interface with Gem technology, including Warp Pad status, the Plug Robonoid (as a lift), remote Gem Warship operation, and for several uses in the Kindergarten. In "Too Short to Ride", Peridot says that her screen had information from multiple different star systems. It is currently unknown how the fingers were able to float independently from the limb enhancers. Notable is that the inactivated fingers do not levitate in their last appearance, suggesting that the user must be in control of the limb enhancer to utilize their independent functions. In "Together Alone", Amethyst uses a finger for a trick that she taught herself.

The leg limb enhancers add height to the Gem wearing them, but appear to have no other use.

In an emergency, the feet can be separated from the legs by pressing on the side of the foot. Peridot ejected her left foot during her escape in "Friend Ship". Peridot is able to scale vertical walls with relative ease when using her feet enhancers, as she ran straight up a wall in the Kindergarten in "Keeping It Together". 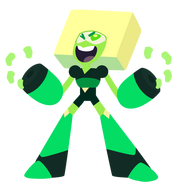 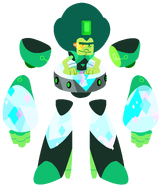 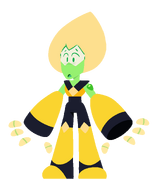