Steven Universe Wiki
Register
Don't have an account?
Sign In
Advertisement
in: A to Z, Objects, Articles lacking sources,
and 3 more
English

Meat Beat Mania is a Japanese arcade game located in the Funland Arcade seen in "Arcade Mania". Within that episode, it was vigorously played by Garnet, becoming addicted to it until Steven smashed it.

Meat Beat Mania is a rhythm-based arcade game that is similar to motion-based video games such as the real-world Dance Dance Revolution and Samba de Amigo. It uses two hams as maraca-like controllers (player 2 uses smaller chicken drumsticks instead). The objective is to move the controllers in the proper pattern and rhythm, as displayed on-screen. It has a two-player competitive mode to make use of the secondary chicken wing controllers. There is a dancing pig (dancing chicken for player 2) on the screen who waves his hands in the direction the player must repeat by moving their controller. There are arrows to help visualize the movement.

In "Arcade Mania" it is played by Garnet, being a non-violent alternative to other games in Funland Arcade. Garnet is lulled into a deep trance by its rhythmic gameplay, playing for hours without pausing. Steven is unable to break the trance by beating Garnet (who plays flawlessly due to her future vision), or by disconnecting the power (Garnet uses her electrokinesis to keep the game running). Steven succeeds by ripping the console off and smashing the game's screen with it but ends up getting in trouble with Mr. Smiley and is forced to clean the arcade up as he is responsible for the mess that he made. 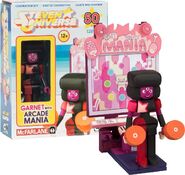 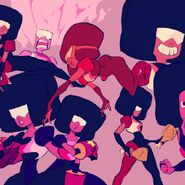