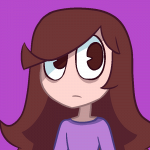 Hey! Welcome to my message wall board thingy.

Please don't talk to me in Portuguese I will not respond

I don't take requests for pngs/edits anymore unless i'm personally interested in it.