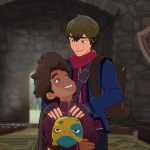 If you want to ask about something or just chat then feel free to leave a message. A fan of Jasper.