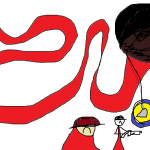 If your name is <insert name here> then don't bother posting on my wall. If that's not your name, go ahead! Say hi!