Steven Universe Wiki
Register
Don't have an account?
Sign In
Advertisement
in: Comic Gems, Characters, A to Z,
and 6 more
English

Minor Corrupted Gem Characters are Corrupted Gems who have debuted but, as of yet, hold no significant or recurring roles. All of the corrupted Gems in the list are presumed to be uncorrupted.

The Ant Gem Monster is a Corrupted Gem who appeared in Issue 1 of the Steven Universe and the Crystal Gems miniseries. She is seen briefly in one panel during the telling of the tale of the Glass Ghost. Although it is unknown if she is real or not, Amethyst is shown defeating her.

She has a segmented body composed of four segments, with each one having two legs, and her gemstone is in her mouth. She does not have any eyes, and her coloration is unknown.

Her appearance is similar to that of corrupted Nepherite, with their gem placements being in the same place and their claw-like mouth.

The Frozen Fragment is a corrupted Gem in appearing in Issue 15 of the Steven Universe comics.

Appearing in the mobile game The Phantom Fable, she looks like the Tongue Monster but doesn't have eyes. She has random green patterns on her skin. 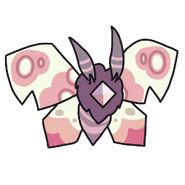 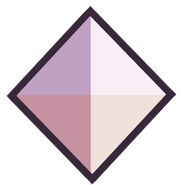 The Mole Gem Monster is a Corrupted Gem that appeared in Issue 14 of the Steven Universe comics, seen briefly fighting the Crystal Gems after destroying the stage meant for Greg to have a concert, she was poofed and captured. She appears as a gray mole with a green shell on her head to covers her eyes. Her faceted gray gemstone is similar to an Amethyst's gemstone.

The Red Bird Gem Monster is a Corrupted Gem that appeared in Issue 1 of the Steven Universe comics, seen briefly in one panel sitting atop a nest. Although her current status is unknown it can be assumed that she was poofed and bubbled since Steven asked Lapis Lazuli to remind him to tell Garnet about the creature later. She appears as a regular light-red bird with a brown beak. She seems to lack any eyes and has a wing-shaped tuft of feathers on the crown of her head. Her faceted red gemstone is on her chest.

The Slime Gem Monster is a Corrupted Gem that appeared in Steven Universe: The Big Donut Special. She crashed into the Big Donut with the Crystal Gems whilst Sadie and Lars attempted to clean up the mess left behind by their battle to pass a health inspection. She is currently bubbled after being defeated by Amethyst.

The Slime Gem Monster appears as a long teal worm encased in a slimy pale green membrane. The membrane forms multiple legs and a pincer that the body of the worm itself does not have. She has a hexagonal golden gemstone located on her featureless face, however when she is poofed her gemstone is purple, suggesting that either the slimy membrane tints the actual colors of the gem monster or the gem is possibly reflective because Amethyst was holding it.

The Scorching Shard is a corrupted Gem in appearing in Issue 15 of the Steven Universe comics.

A spiky tentacle/tail can be seen at the beginning of Issue 6 during a fight against Pearl.

The Unknown Giant Gem Monster is a Corrupted Gem that first appears in Beach City or Bust, a play put on by Jamie and Steven in "Historical Friction", portraying her defeat at the hands of an equally massive Crystal Gem fusion. Her current status is unknown.

She had at least four tentacles and at least two extra longer tentacles. Her head resembles both the Centipeetle Mother and the Big Bird. The Unknown Giant Gem Monster appears to be aquatic.

She has a barrel-shaped body with three similarly-colored pairs of short stubby legs on her sides. Four finger-like appendages accompany on each leg. Her entire body mass, aside from their conical gemstone, seems to be composed of a gelatinous substance. She is based on a tardigrade, which are also sometimes referred to as water bears.

The Water Bear is a formerly corrupted Gem that first appeared in "Love Letters". In the episode, the Water Bear presumably attacks Garnet during her search for Malachite in the ocean and is brought up to the surface. For unknown reasons, she is thrown back into the water instead of being poofed and bubbled.

Jasper originally incarcerated her (or a corrupted gem of the same type) as she was forming her Corrupted Gem army to take on the Crystal Gems. Jasper accidentally frees the Corrupted Gems when she crashed into a cliff face and knocked several free from their cells.

Her status is unknown after running off, but she is assumed to have been somewhere near the Beta Kindergarten.

She was eventually captured, and healed along with all the other corrupted gems in "Change Your Mind".

Her light-blue body contains a lavender-violet conical gemstone located in her head, resembling a single eye. When uncorrupted, she appears as a stout humanoid with translucent skin, and her gemstone orientation is inverted with the cone-shaped end pointing upward from her hairless scalp.