Steven Universe Wiki
Register
Don't have an account?
Sign In
Advertisement
in: Objects, A to Z, Media,
and 4 more

These are all pieces of media that have appeared in Steven Universe, but hold no significant nor recurring role.

FOINE is a fashion magazine first seen in Beach Party. It's later seen being read by Sadie in the episode "The New Crystal Gems".

How to Talk to People

It appears to be a guide that helps readers communicate with other people. Only two pages are seen in the episode, showing a two step-process for talking to someone. Step 1 is to "think of what you want to say" and Step 2 is to "say it".

Pretty Hairstylist is a manga series read by Amethyst and Lapis Lazuli in Steven Universe. It first appeared in "Keeping It Together", and has made additional appearances in "Crack the Whip" and "Kindergarten Kid".

NOICE is a (presumably adult) magazine owned by Lars in the episode "The New Lars".

Brigand is a book read by Nanefua in the episode "Buddy's Book". It appears to be an adult romance novel.

Lonesome Lasso is a comic first seen in "The Question". It is most likely about a cowboy trying to find a character called 'Sally May'. Lonesome Lasso and Sally May get married at the end of this comic.

Carrion Amongst The Clover

Carrion Amongst The Clover is a book Connie Maheswaran owned in Issue 7 of the Steven Universe Comic Series.

The plot involves a princess named Mearl of North End (a parallel to Pearl) who adopts a fake identity to run away from her responsibilities. From there, her experiences outside her kingdom help reunite her people with those from the "Heavy Sphere", with whom they have been feuding for centuries. Eventually, with events that are unexplained, she is saved by Sir Argarate and his squire Peapod and returns to her homeland. Upon returning, she finds her mentor, Everlord of the Everlands, had been banished behind the Shadow Curtain, which one can never pass through without being broken down into mere Essence. 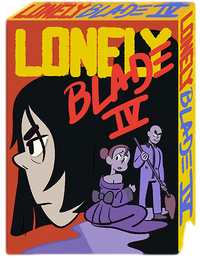 Lonely Blade IV is a fictional Japanese film the Crystal Gems watched in "Steven the Sword Fighter". It is the fourth entry in the fictional Lonely Blade film series.

The story centers on Lonely Blade, a sword fighter hunting for the evil force that had killed his brother. The mastermind behind the evil is revealed to be the custodian and is the one that battles Lonely Blade at the end of the movie. 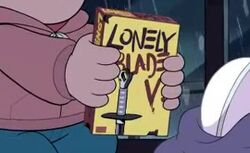 Lonely Blade V is a movie first seen in the episode "Steven the Sword Fighter". It is the continuation of Lonely Blade IV.

The story takes place after Lonely Blade IV where Lonely had already managed to avenge the death of his brother, but finds out that he might still be alive somewhere.

The show takes place in a courtroom, with a canine being the judge to a case. It is likely a comedy show because the canine does not seem serious and likely cannot speak.

Under the Knife is a fictional TV show that is first seen in "Fusion Cuisine". The show is a satirical spoof of hospital dramas. It follows stories of unusual medical situations overseen by a doctor and nurse.

There is one known episode, focusing on a patient who has his legs inserted into his brain. This episode is the "mid-season pre-finale". 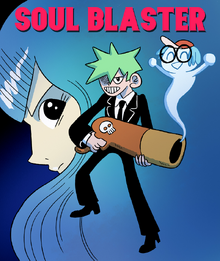 Soul Blaster is a fictional anime and manga within Steven Universe, reviewed by Ronaldo on his blog. It is about a high school student named Kyosuke fighting rouge spirits with his Soul Blaster, a gun powered by the spirit of his younger brother Kettaro. Ronaldo comments that despite the name, the anime is mostly about Kyosuke and Kettaro's relationship, with the battles against evil ghosts happening within the last few minutes of each episode. The manga has been running since 1976 and has at least 3762 chapters as of November 13th, 2014.

Evil Bear 2: Bearly Alive is a classic horror movie on VHS that Ronaldo owns that first appeared in "Horror Club". The movie centers around the murderer Evil Bear, who eats the body parts of his victims. At least one of these victims is known, the Hermit, whose leg is eaten by Evil Bear. There is also an unnamed woman in the movie. As shown on the cover of the case, Sophia Demonzini is the creator of this film.

There appear to be three versions of this movie:

Fangs of Love is a movie Sadie owns in "The New Lars".

The movie seems to be a low budget, romantic horror movie.

A collection of movies seen on Sadie Miller's shelf in "The New Lars":

As seen in "Sadie Killer":

Koala Princess is an anime series watched by Ronaldo Fryman and Jane. In "Restaurant Wars", Jane is on her way to return some of Ronaldo's DVDs of this series, only to find him seemingly dating Kiki Pizza, causing her to break up with him.

References to this anime series are shown on screen in "Keep Beach City Weird" when Ronaldo discusses "sneople" controlling things like anime discussion forums. The series is referenced again in Ronaldo's texts to Steven in "Gemcation".

I Can't Believe My Stepdad's My Sword

I Can't Believe My Stepdad's My Sword is an anime watched by Ronaldo Fryman. In "Rocknaldo", he owns a replica of a sword from this anime.

Space Train to the Cosmos 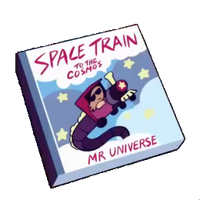 Space Train to the Cosmos is an album released by Greg Universe, best known by his stage name "Mr. Universe".

The album was released by Mr. Universe with Marty as his manager. His only known song is on the album, titled "Comet". It appeared at Steven's Room in Steven Universe: The Movie.

The Philosophy Majors - Nietzsche's Breakdown is an album that belongs to Greg which had debuted in "We Need to Talk". It later appeared in "Greg the Babysitter".

In the background, a big moon shines behind a dry tree with silhouettes of people on the hill looking on it. In the front, there is what appears to be Friedrich Nietzsche in a black suit, a red tie, wearing glasses, and eating an apple. His white/blond hair is combed back. In the lower right corner, "Nietszche's Breakdown" is written in a purple-red color. Beneath it, there are two red apples.

Kerry Moonbeam is the guy who wrote the song, “Mr. Universe”. This is the song that inspired Greg to change his last name from DeMayo to Universe in "Mr. Universe".