Nephrites are a type of Gem that were in charge of piloting and commanding ships, including Homeworld Dropships. All Nephrites shown so far, including "Centi", have been voiced by Aparna Nancherla.

Nephrites are in charge of piloting Homeworld Dropships to begin colonizing other planets, and may also serve as pilots for various other types of ships. Their rank in the caste system is never clearly stated, but appears to be high considering they captain their own ships and Yellow Diamond was shown to contact a Nephrite captain directly in "Jungle Moon", something she would not do with a lower-ranking Gem. Numerous Nephrites were corrupted, with one (known as "Centi") formerly being a captain in charge of other Nephrites (in command of a dropship that went to Earth). These Gems flew in Gem spaceships and started building structures on Gem colonies.

Nephrites stand at roughly the same height as Pearls, with a slender build, no visible nose, and a large single eye with a yellowish off-white sclera. They are also shown to have thick wild hair similar to that of Quartzes, although most have their hair styled into buns and braids.

Unique among gems, Nephrites come in two different physical variations that seemingly denote the rank that they are "born" into, despite being of the same gemstone. Captains have teardrop-shaped heads with pointed chins, and large ring-bearing cuts that replace and function as an eye. "Lesser" crew members have spherical heads, and smaller cuts that can vary in placement by individual.

Corrupted Nephrites take the form of giant, armored centipede-like creatures that can spit acid. When uncorrupted, they gain corruption scars in the form of spikes and/or isolated pieces of exoskeleton on their forearms.

Since they serve as pilots for colony drop ships, all Homeworld Nephrites wear standard pilot uniforms, albeit with an additional fur shoulder pads and sometimes a skullcap. Some, such as Neprhite Facet- 413 Cabochon-12 , also have coat tails on their uniform, though it's not known if this is used to differentiate captains from normal crew members.

Nephrite's Crew is a group of various formerly-corrupted Nephrites whose captain was Nephrite Facet-413 Cabochon-12 ("Centi"). Two of these Nephrites, then corrupted, debuted in "Monster Reunion".

They did not evacuate Earth when ordered to as they did not want to leave their captain behind, and as a result they also became corrupted. Beginning with "Monster Reunion", they lived together in the Ancient Gem Colony Ship.

In the comic book Steven Universe: Fusion Frenzy, a Nephrite is featured as a corrupted gem to fight, initiating Pearl and Amethyst to fuse into Opal.

The Nephrite is pictured on top of a pile of rocks in a cave, with small wings on her back. Amethyst and Pearl refer to the nephrite as a "Flying Centipeedle" throughout the comic.

Additionally, when Pearl holds the bubbled "Flying Centipeedle" in her hand, the gem doesn't seem to resemble an actual nephrite gem, but a Quartz cut gem. It is unknown whether there is meaning behind the unique gem cut or it's just the artists' take on a nephrite gemstone.

The Nephrites in Rose's Fountain 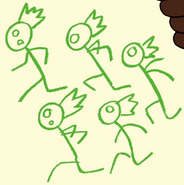 Nephrite Crew in her drawing in "Monster Reunion"

Other Nephrites are shown living in Little Homeworld during the events of Steven Universe: The Movie.