Steven Universe Wiki
Register
Don't have an account?
Sign In
Advertisement
in: Characters, A to Z, Fusion Gems,
and 3 more
English

Obsidian is the fusion of Garnet (and by extension Ruby and Sapphire), Amethyst, Pearl, and Rose Quartz. While not appearing on screen, she was depicted in "Historical Friction" in a play performed by Jamie and Steven. She is the basis for the statue that makes up the Crystal Temple, which debuted in "Gem Glow".

Her name was confirmed by Joe Johnston, after her counterpart with Steven appeared in "Change Your Mind".[1]

In a play about William Dewey, he was saved by a Fusion Gem (Obsidian) from a giant Gem Monster. While the silhouette from the play gives a very basic idea of her physical appearance, the rest of her characteristics are too obscure to define. She presumably looks similar to her counterpart with Steven.

Her lower body and upper torso appear to be reminiscent of Garnet. She also sports a huge mane of hair kept in a proper hairstyle closely resembling that of Rose Quartz. She is depicted with four arms, while the Crystal Temple statue of Obsidian has eight arms.

In the play, she is portrayed as towering over William Dewey, his ship, and its crew. While possibly an artistic choice by Jamie, the final script was edited by Pearl for accuracy. 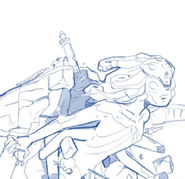 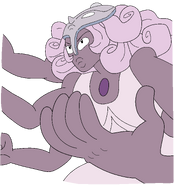 Artistic rendering of Amethyst as Obsidian by Ronaldo Fryman from Keep Beach City Weird: You Can't Hide the Truth!!! 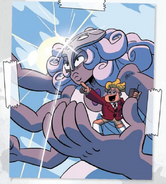 The full image of the artistic rendering of Amethyst as Obsidian.