Attack the Light
The Orange Light (presumed from dialogue, non-canon) is a giant, turtle-like Light Prism Monster and the third boss of Attack the Light.

Orange Light has an appearance resembling a bright orange turtle with a light and shiny crystal shell, and it also has crystals on its face and legs.

The Orange Light has very high defense due to its hard shell, so reducing it’s defense is recommended. The boss’s main attack is raining down fireballs on all 3 of the Crystal Gems, dealing a good amount of damage to each. It will also fire a powerful beam of light at 1 of the Gems, which does even more damage than the fireballs. When the boss is reduced to 1 hp, a cutscene will occur in which Orange Light summons massive fireball that reduces the health of the all the Crystal Gems to 1. The gems will consider retreating before Steven cheers them on and brings them back to full health. After this, the player gains access to the Alexandrite attack and must use it to defeat the boss. 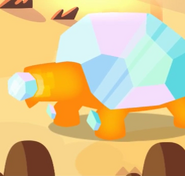 Add a photo to this gallery
Retrieved from "https://steven-universe.fandom.com/wiki/Orange_Light?oldid=1975534"
Community content is available under CC-BY-SA unless otherwise noted.