Pearl's Chamber is a room in the Crystal Temple created by Pearl in "The Test". It was created (as part of an informal challenge at Steven's request) to see if he was ready to go on missions as a member of the Crystal Gems.

The room's floor has a similar pattern to that of a dance floor, with several tiles that light up cyan and play a piano note when someone touches, stands or walks on top of them. After four tiles have been stepped on, and four notes have been played, ascending stairs will rise from the floor, allowing one to reach the door to the next room.

Pearl's Chamber is the second of three adjacent rooms that contain the challenges given to Steven by the Crystal Gems in "The Test", with the first room being Amethyst's Chamber and the third being Garnet's Chamber.

Following the themes of the other Chambers, Pearl's involves two obstacles that need to be navigated to reach the next room. The first is a puzzle involving music panels on the floor that light up and emit a piano note when stepped on; four notes must be played in the correct sequence to reach the next room.

The second challenge involves waiting for the right moment to pass through a line of sweeping axes. It is important to note, however, that the music panels will always play the right pattern regardless of which is pressed and when, and the sweeping axes are designed never to hit the target; if one attempts to touch the axes, they will phase harmlessly through the person. This was done to make sure that Steven could not fail the test, thus raising his motivation and spirits. 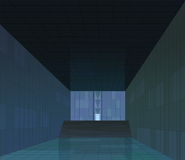