Pearls were servants on Homeworld, acting as custom-made Gems with the purpose of serving their owner. All Pearls shown, with the exception of Pink Pearl and Pearl under White Diamond's control, have been voiced by Deedee Magno-Hall.

In the strictly regimented Homeworld hierarchical system, Pearls function as attendants to high-ranking Gems. They combine the duties of a variety of different service roles, such as a lady-in-waiting (tending to and making requests on behalf of her master), footman (opening doors and announcing their master's arrival), and secretary (carrying out clerical tasks). While not primarily an entertainer like a Spinel, Pearls do nonetheless act as companions and provide simple luxuries such as singing, dancing, and projecting visual entertainment via holograms. One of their most unique functions is their ability to hold and store inside their Gem a seemingly limitless number of their owner's belongings.

Pearls are seen as status symbols of the Gems who own them. While Peridot describes them as "someone's shiny toy" and also mentions that there are hundreds of them on Homeworld, it is nevertheless implied that they're reserved only for noteworthy Gems of high social standing such as the Diamonds and aristocrats like Sapphires. She underlies this by commenting that the idea of a Peridot owning a Pearl is unprecedented. Pearls may also be earned by committing a significant act of merit, as "Eyeball" believed she would be rewarded with her very own Pearl for capturing Rose Quartz.

Gems that are worthy of a Pearl could be Gems that have served great purposes or are rare. Such as Sapphires, Morganites, Aquamarines, and of course, Diamonds. All Gems with a high status are allowed to have Pearls.

Pearls live to serve and their identity is fundamentally tied to their owner. They are expected to be utterly submissive and obedient, simply waiting on their owners and not acting independently in any way. Yellow Pearl even claims that her feelings "are irrelevant" when Steven asks her what she likes to do. When formed for the first time, their Gem emerges from a holographic oyster after they learn their superior’s preferred name. They are expected to consistently exhibit subservience by remaining silent unless spoken to and remaining a few paces behind their superior when walking with them. It is physically impossible for a Pearl to disobey a direct order from their owner,[1] and are normally dismissed with the phrase "that will be all" generally followed by the owner clapping her hands twice when they are no longer needed. There are exceptions to these rules depending on who the Pearl belongs to, such as those of the Diamonds. Yellow Pearl is able to get away with talking down to Gems higher in the caste system whenever she feels they would disturb Yellow Diamond, and clearly relishes the opportunity to do so. White Pearl was seen (and feared) as an extension of White Diamond's will, making even the other Diamonds tread lightly in her presence.

Pearls were made and repaired in The Reef, which also served as a boutique and trinket shop of sorts where their owners could obtain things for them to use and wear.

Physically, all Pearls appear to have a slender, androgynous form and a beak-like nose. They can also be "customized" by owners in color and appearance, allowing them to have very noticeable differences from each other, unlike most other types of Gems who would normally wear near identical uniforms and have very similar, if not exact, colors. If a Pearl is left uncustomized, they would have an ivory complexion and light cyan eyes.

A default setting Pearl would wear a dress resembling Pink Diamond's. The top half has puffy blue shoulders, an amber-colored top with a V neck, a diamond-shaped cutout at the bottom, and a light yellow trim along the bottom. The bottom half has a pink skirt with transparent drapes over it and pale blue ballet flats.

Most Homeworld Pearls tend to wear some form of skin-tight, balletic clothing, such as a singlet or body suit, with a flowy sheer material attached to reflect a certain element of their owner's clothing. The position of their gemstone also matches that of their owner, but there can be exceptions like Pink's second Pearl. 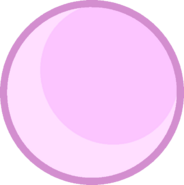 Her gem when fused as Rhodonite underneath a transparent shawl.

Concept art of Rhodonite's Pearl from Steven Universe: End of an Era.

In the Flashback of Lapis Lazuli in "The Same Old World" the silhouette of a Gem that appears to be a Pearl with hair similar to Yellow Pearl. It is most likely Yellow Pearl as her silhouette is almost identical and she would have been on Earth at this time, but it has yet to be confirmed.

A Pearl can be seen from behind in an unknown gem city watching Steven's message.

Holograms of several Pearls modeling various outfits are seen at The Reef. It is unclear if these holograms were based on actual Pearls, or if they're merely examples of what a Pearl can look like.

Aubergine Pearl - A type of Pearl who acts as a tour guide ever since the dismantling of the empire. In her debut episode, she can be seen leading a tour group comprised of Topaz, two corruption-scarred Nephrites, a Sapphire from the Era 3 ball, and a Peridot with square-shaped hair and bushy eyebrows.

Lonely Pearl from The Phantom Fable