Peridot, nicknamed Squaridot for her square hair, is an Era 2 Homeworld Gem and a boss in Save the Light.

Squaridot has an olive-green complexion (darker than the Crystal Gems' Peridot) and chartreuse-yellow hair in the shape of a rectangular prism. A white visor covers the top half of her face, and her triangular gemstone replaces her left eye.

Squaridot wears a green and black Homeworld uniform with a bulky upper torso and spherical shoulder pads. Her stomach and knees bear Yellow Diamond's insignia. She is equipped with limb enhancers on her arms and legs, indicating that she is an Era 2 Peridot.

While the Crystal Gems are in The Great North, Squaridot appears and battles them in the Attack Pod.

Squaridot presumably possesses the standard abilities and traits of an Era 2 Peridot, including agelessness, regeneration, and superhuman durability. 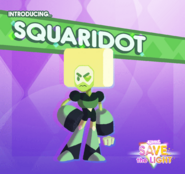 Retrieved from "https://steven-universe.fandom.com/wiki/Peridot_(Squaridot)?oldid=1557104"
Community content is available under CC-BY-SA unless otherwise noted.