Peridots were low ranking technological Gems that were mostly used as kindergarteners. All known Peridots have been voiced by Shelby Rabara.

Peridots served mainly as technicians and kindergarteners, sometimes performing field assignments on other planets, such as the Peridot who befriended Steven and joined the Crystal Gems. Being workers, Peridots had a low rank, only being allowed into elite Homeworld areas if a job was needed to be done there.[1]

Era 2 Peridots were given Limb Enhancers to compensate for the lack of strength and unique abilities older Gems had, due to the depletion of resources on Homeworld since the dawn of Era 2. That being said, the Crystal Gems' Peridot is shown to have ferrokinetic abilities, and is the only known Peridot that has this power.

Peridots tend to have green skin and yellow or green hair that comes in a variety of shapes. While the exact appearance of an Era 1 Peridot (if any different) is unknown, it is known that they possessed abilities which made technological enhancements unnecessary for them to perform their duties. 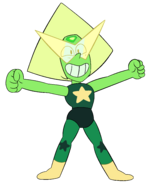 A Peridot wearing a non-uniform styled outfit is seen watching a single transmission panel. She appears to be somewhat of an outcast or an atypically-working Peridot. Her gem placement is completely unknown, as is much of her appearance.

Multiple Era 2 Peridots appear in Unleash the Light. They inhabit Crystal System Colony 215 and seem to be owned/employed by Demantoid, a short, green, prism-bearing Garnet. Steven refers to them as "Peri Pals", due to their friendly nature.

A Peridot appears, partaking in Aubergine Pearl’s tour of Homeworld.