"Rebecca Sugar was asked by Cartoon Network to create a pilot for a proposed cartoon series. The result: Steven Universe. Here's the finished pilot. Rebecca and her crew are hard at work on the series, and what you see here are early versions of character designs and animation. Rebecca's brother Steven is working on the backgrounds for the show, so to say I am super proud would be an understatement. Enjoy the video and look for Steven Universe to start in the fall."

Steven is given a magical time travel hourglass from Amethyst and does what any kid would do. He uses it for comebacks, but toying with magic draws trouble to his sleepy beach town and Steven has to step up and save the day, with more comebacks.

The episode begins with a now-scrapped intro with the Crystal Gems introducing themselves. Steven is waiting for the other Crystal Gems to come back from the Crystal Palace. When they arrive via Warp Pad, Amethyst shows an Electric Skull to Steven. Pearl slaps it out of Amethyst's hand, only to make it start laughing hysterically. Pearl then smashes it with her foot. Pearl says their Crystal Palace was swarming with the creatures. Amethyst takes the hourglass out of her fanny pack and says that the creatures were after it. Steven asks if he can see it. Amethyst says he can, but Pearl says no because it is extremely powerful and that they shouldn't have brought it home. Steven tells Garnet to make Pearl let him see it. She shushes him. Steven is disappointed and says that he wants to go on adventures with them next time. He tells them that he wrote a song for the team. He begins to sing We Are The Crystal Gems (which later on turns into the theme song for the finalized show). Amethyst and Pearl begin to tease him, saying that he will look like a clown if he were to play the song in battle. Garnet tells them to not make fun of Steven and they stop. Pearl explains to Steven that he is too young to come with them, and he doesn't have powers in his gem yet. Steven says he wants to help and Amethyst suggests that he go grab some donuts. She gives him money and he leaves.

When Steven walks outside to go to Big Donut, he learns that Amethyst gave him the Hourglass. He keeps it in his pocket and proceeds to buy donuts. As Steven enters the store, Lars, the cashier, begins to mock Steven. Steven slams his money on the desk and demands to have three donuts. Lars retrieves the donuts and makes fun of Amethyst, Garnet, and Pearl. Steven says that they save the world and that he is also a Crystal Gem. Lars says that they are all hot girls, and Steven is not. Steven storms out as Sadie tells Lars to lay off. Steven broods about it, and says, "If I was a hot girl, I wouldn't be talking to you." He regrets not saying that as it would have been really funny. His pocket begins to glow and he is back in Big Donut when Lars made the comment. He says the comeback and high fives Sadie. Lars calls him a joke and Steven storms out again. He comes up with another comeback and is again transported through time to say his comeback:"Well,atleast people actually like jokes!". Sadie says that Steven is "on fire."

Back at their home, Garnet is saying that she has a bad feeling as Steven walks in. Steven tells them what happened and that The Hourglass took him back in time. Pearl is shocked and asks him why he has it. She turns to Amethyst and asks why she gave it to him. Amethyst says she was letting him see it because he wanted to. Pearl reveals that they had been protecting the hourglass for a thousand years and now that it was activated, it could only be used by Steven for its chosen purpose. Steven tells them it was for comebacks and Amethyst laughs. Garnet notices an Electric Skull outside and alerts the others. Pearl explains that activating the Hourglass caused holes in the fabric of time and the creature sensed it. Garnet asks Steven why he is such a buttface. Steven is offended by this. Pearl, Amethyst, and Garnet retrieve their weapons from their gems and begin to fight the Electric Skull. They are beaten and Steven tries to help them when they fall. They are all down and Steven must think of a comeback to Garnet's comment. He does and is transported back to the moment that Garnet called him a buttface. He says the comeback and directs the girls to get on top of the Big Donut and hide behind the sign. Steven points out they need to destroy its hair, so they push the sign onto the Electric Skull. It begins to get struck by lightning and eventually dies. Steven wishes he could've told them this morning that 'this clown is gonna save your lives'. The Hourglass takes him back in time to the morning. He tries to stop it, but fails. He smashes it on the ground, preventing the majority of the previous events to occur. The episode ends with him saying, "This clown is going to save your life." 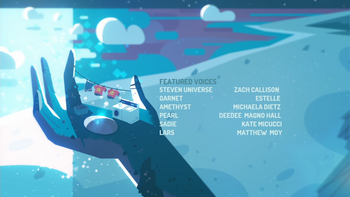 While the episode isn't canon and isn't part of the official continuity,[1] elements of it were reused in later episodes: