Steven Universe Wiki
Register
Don't have an account?
Sign In
Advertisement
in: Articles lacking sources, Characters, A to Z,
and 9 more
English

Quartzes are a broad category of Gems that served as the primary soldiers in Homeworld's Caste System. All Quartz Gems seen so far are either voiced by Michaela Dietz, Kimberly Brooks, or Christine Pedi, with the exception of Amethyst while she was being controlled by White Diamond.

Prior to Era 3, Quartzes were used as soldiers, guards, and escorts. They appear to be less common than Rubies. According to Ian Jones-Quartey, some Quartzes are defense-oriented (similar to Rose Quartz) since "they can't all be tanks." Numerous Quartzes were made on Earth in the Prime and Beta Kindergartens.

Quartzes are the most diverse known Gem type, with Gems including Amethysts, Carnelians, Jaspers and Rose Quartzes. Some types of Quartzes had a somewhat different role in the caste system. These types include Agates, who ranked higher than other Quartzes and seemed to be administrative in nature, and Citrines, who seemed to be guards for elite Gems (working for such high-ranking Gems as Emerald and Hessonite).

Quartzes are much taller than the average Gem, with broad shoulders and a muscular build. Most Quartzes appear to have the same general height and build, though Quartzes with different body shapes have been known to occur, usually as a result of a poor-quality Kindergarten or an exceptionally long formation time. Most of these Quartzes are much shorter or skinner than average, causing them to be considered "defective", though they still retain the full strength and abilities of a typical Quartz. However, a few of these variant Quartzes are actually larger than average.

There is much diversity in Quartzes, even among those of the same Gem type. Their eye shapes, eye colors, noses, and jawlines vary.

Quartzes have some of the longest and thickest hair of any gem, though Agates in particular tend to have their hair styled into short, neat buns to denote their rank. Their hair color is usually very pale, but darker hair is not uncommon. Quartzes have varied hair textures: Most of them have straight hair, but many curly-haired Quartzes exist. Some Quartzes may have patterns and bandings on their skin, resembling those of their real-life counterparts.

All Homeworld Quartzes wear the standard Homeworld uniform, while Quartzes with a more managerial position, such as Agates, wear an additional shawl and boots. Decorated Quartzes, such as Jasper, can also wear capes over their uniforms, though these capes are separate appearance modifiers rather than irremovable parts of their physical forms.

When corrupted, Quartz Gems take the form of giant, eyeless, wolf-like beasts with chimeric features. They have furry manes that extend down their backs and cover their tails, and large muscular forelimbs ending in broad forepaws that resemble hands. Their hind limbs are relatively lean and gaunt, ending in cloven hooves like those of an ungulate. They have large, bulldog-like heads with prominently fanged underbites and a varying number of horns on their heads or where their facial features would be. Quartzes that have been uncorrupted keep their horns as corruption scars.

Agates hold a position of authority slightly higher than other Quartzes. They appear to serve as a form of manager for groups of other types of Quartzes, keeping them in line and ensuring that they perform their duties. So far, while other Agates have appeared, Holly Blue Agate is the only major Agate to be shown performing her role on Homeworld, where she is in charge of a group of Quartz soldiers and manages Pink Diamond's Zoo.

Amethysts come in various shades of purple and occasionally red. They have rounded upper lips. Their eyes can be black, purple, or pink, and may or may not have visible irises.

Amethysts were mass-produced in Earth's Prime Kindergarten for Pink Diamond. According to Garnet in "Your Mother and Mine", many of these Amethysts became Crystal Gems during the Rebellion. Amethyst 8XM, who emerged after the war, also joined the Crystal Gems. The remaining Amethysts from Earth were stationed at Pink Diamond's Zoo thousands of years later, now serving Blue Diamond due to the "shattering" of Pink. All of the Prime Kindergarten Amethysts share a laid-back and comedic personality. They are friendly towards their fellow Quartzes, quickly forming friendships with them. They also treat the Zoomans with compassion, even being sent to console and reassure them when they become upset.

Four Amethysts appear in "Gem Heist" at Pink Diamond's Zoo; two of them are in charge of guarding the door in the Zoo's cargo bay. The two Amethysts tease the Crystal Gems when they land on the Zoo, resulting in a scolding from their superior, Holly Blue Agate. Later in "Gem Heist," another pair of Amethysts send Steven into the Zoo's tunnel.

In "That Will Be All", this turns out to be a prank by Amethyst and the many other Homeworld Quartz guards she has met (whom she refers to collectively as "the Famethyst"), three of which having been formed right above her. These Amethysts inform her of her serial number, being Facet-5 Cut-8XM.

All Amethysts in this episode wear Blue Diamond uniforms.

Many Amethysts appear in Pearl's flashback, all of which emerging from the Prime Kindergarten. They all wear Pink Diamond uniforms.

Jaspers are a broad variety of Quartz soldiers that vary in color. Most Jaspers have patterns on their skin. The famous Jasper describes her Gem type as never giving up and always getting what they want.

The most common type of Jasper in the series is the Red Striped Jasper. Quartzes of this type have orange skin with red or orange stripes and yellow eyes with visible irises.

Several Jaspers from the Beta Kindergarten debuted in "That Will Be All". Like the Amethysts, they originally belonged to Pink Diamond, but were reassigned to Blue. Despite their variety of Quartz, they are all considered members of the "Famethyst". They are all Red Striped Jaspers with Blue Diamond uniforms.

Two identical Red Striped Jaspers in Blue Diamond uniforms attend the Era 3 ball, seen dancing along with several Amethysts. They likely appear as duplicates of one another to fill crowd space. One is later seen in "Homeworld Bound" arguing with an Amethyst over the Zircons' election.

Rose Quartzes are a pink type of Quartz which appear to be designed in the visage of Pink Diamond. They have black eyes, pink skin and hair, and rounded lips that appear to be adorned with lipstick or lip gloss. Around the time of Pink's rebellion, all Rose Quartz Gems were bubbled inside of Pink Diamond's Zoo.

As of Era 3, all of the Rose Quartzes were unbubbled and now reside in the Zoo alongside the Famethyst, Holly Blue Agate, and the Zoomans. Three of them left to visit Steven while on Earth, wanting to check out the planet.

Tiger's Eyes are a type of Quartz which have yet to be seen but were mentioned by name.

An unknown Quartz warrior appears in Pearl's hologram flashback of the Rebellion. She wears a helmet with a visor and wields a battleaxe. She is voiced by Michaela Dietz, which may signify that she is an Amethyst.

There are a few unknown Quartzes featured in Lapis' flashback. They wear helmets, and one of them wields a spear. None of them wear clothes, but this is most likely a stylistic choice. 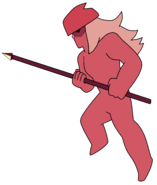 During the flashback, many Quartzes belonging to Pink Diamond appeared, emerging from their incubation in the ground alongside Rose Quartz. The silhouettes of other Quartzes, whose purple coloring suggests that they are Amethysts, are also shown working in the Kindergarten.

Pink Diamond's Quartz From The Flashback

Four unidentified Quartzes can be seen from behind watching Steven's message.

An unnamed uncorrupted blue quartz can be seen on the cover of the pamphlet "You & Your New Horns". She somewhat resembles Ocean Jasper. 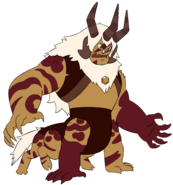 Both the White and Green Colored Gem Quartzes are additionally featured as enemies in the mobile game Tap Together.