Quartzes are a broad category of Gems that served as the primary soldiers in Homeworld's Caste System.

Quartzes were initially a soldier caste; some individual Quartzes, such as Jasper, were used as bodyguards and escorts. They appear to be less numerous than Rubies. According to Ian Jones-Quartey, some have defensive powers as well (like Rose's) since "they can't all be tanks." Jasper stated that Quartzes are made to fight and Jaspers specifically always get what they want. Some also act as guards at Homeworld outposts such as Pink Diamond's Zoo. They were commonly made on Earth. Quartzes are the most diverse known Gem type with Gems including Amethysts, Carnelians, Jaspers and Rose Quartzes.

Other Quartz types include Agates, who rank higher and seem to be administrative in nature and Citrines, who seem to be elite guards (including Emerald and Hessonite's guards).

Quarztes are much larger than most other types of gems, made to fit the role of an elite warrior, Quartzes have incredible height, broad shoulders, and an intimidating muscular build. While their exact height can vary depending on how well they formed when they were incubating in the ground, most quartzes appear to be the same height as each other, with variations of this standard height being very rare. Quartzes have some of the longest and thickest hair of any gem. Their hair color is often a very pale tone of the color of their gem, although some have dark brown hair. Some Quartzes may have patterns and bandings on their skin, resembling that of their real-life counterparts.

All Homeworld Quartzes wear the standard Homeworld uniform, while quartzes with a more managerial position, such as Agates, wear an additional shawl and boots. Decorated Quartzes, such as Jasper, can also wear a cape over their uniform, though this isn't actually a part of their physical form.

When Corrupted, Jasper gems take the form of a giant eyeless wolf-like beast. They have a furry mane which extends down their back and covers their tail, and they can have a number of horns on their head. Based on the appearance of Blue Lace Agate and Lace Amethyst when uncorrupted, other varieties of Quartz likely take on a similar appearance, although this has not been shown in full. 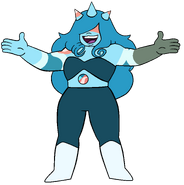 Agates hold a position of authority slightly higher than other Quartzes. They appear to serve as a form of manager for groups of other types of Quartzes, keeping them in line and ensuring that they perform their duties. So far, Holly Blue Agate is the only major Agate to be shown so far. She is in charge of a group of Quartz soldiers and manages Pink Diamond's Zoo.

Amethysts are a purple type of Quartz, most notably produced on Earth's Prime Kindergarten for Pink Diamond. Besides Amethyst 8XM, the Amethysts from Earth were stationed at Pink Diamond's Zoo thousands of years later, now serving Blue Diamond and are commanded by Holly Blue Agate due to the "shattering" of Pink. Like Amethyst 8XM, these Amethysts share a laid back and comedic personality.

Four Amethysts appear in "Gem Heist" at Pink Diamond's Zoo; two of them are in charge of guarding the door in the Zoo's cargo bay. The two Amethysts tease the Crystal Gems when they land on the Zoo, resulting in a scolding from Holly Blue Agate. Later in "Gem Heist," another pair of Amethysts send Steven into the Zoo's tunnel, one with a square-faceted gemstone.

In "That Will Be All", this turns out to be a prank by Amethyst and the many other Homeworld Quartz guards she has met (whom she refers to collectively as "the Famethyst"), three of which having been formed right above her. These Amethysts inform her of her serial number being Facet-5 Cut-8XM. Among the Amethysts and Jaspers are two defective Gems: "Skinny", a tall and skinny Jasper, and Carnelian, shorter than most Quartzes.

Many Amethysts appear in Pearl's flashback, all of which emerging from the Prime Kindergarten.

They appear in the Delta Kindergarten. They are all enemies.

Jaspers are a broad variety of Quartz soldiers that vary in colors, such as Biggs Jasper and the Snow Monster. The famous Jasper describes her cut as never giving up and always getting what they want.

Several Jaspers from the Beta Kindergarten debuted in "That Will Be All". Like the Amethysts, they originally belonged to Pink Diamond but now served Blue. Despite their Gem type, they are all considered members of the "Famethyst".

Two identical Jaspers attend the Era 3 ball, seen dancing along with several Amethysts. They likely appear as duplicates of one another to fill crowd space.

Unlike several other uncorrupted Gems, she was not "redesigned", but rather both instances are fully separate both in and out of universe. This is shown by the fact that both Ocean Jasper designs appear in "Change Your Mind", in the same scene.

She appears in Delta Kindergarten.

As of Era 3, all of the Rose Quartzes were unbubbled and now reside in the Zoo alongside the Famethyst, Holly Blue Agate, and the Zoomans. Three of them left to visit Steven while on Earth, wanting to check out the planet. They are all voiced by Kimberly Brooks.

Cherry Quartzes are a type of large and pink Gem. The role of them is unknown, but they can be presumed to have had a similar role to the other Quartz Gems.

Angel Aura Quartzes are multicolored Quartzes. Their role is unknown, but they can be presumed to have a similar role to other Quartzes.

Tiger's Eyes are a type of Quartz which is yet to be seen but has been mentioned by name.

There are a few unknown Quartzes featured in Lapis' flashback.

Unknown Quartz Warrior 4
Add a photo to this gallery

During the flashback, many Quartzes belonging to Pink Diamond appeared, emerging from their incubation in the ground alongside Rose Quartz. The silhouettes of other Quartzes, whose purple coloring suggesting they are Amethysts, are also shown working in the kindergarten.

Amethysts listen to Rose's Speech.
Add a photo to this gallery

Four unidentified quartzes can be seen from behind watching Steven's message. 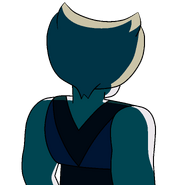 An unnamed uncorrupted blue quartz can be seen on the cover of the pamphlet for "You & Your New Horns".

These gems appear in The Phantom Fable. Their weapons are large tipped spears.

An unnamed blue Quartz, with her gemstone located on her chest 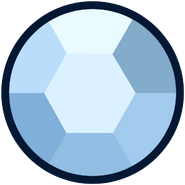 Her weapon, a large tipped spear
Add a photo to this gallery 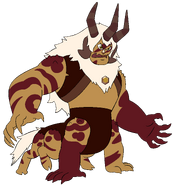