Rebecca Sugar is the creator of Steven Universe. She is an artist, composer, and director who is most recognized for her work on the show Adventure Time, another Cartoon Network original series, as well as her award-winning animated short "Singles." She has also created a graphic novel, Pug Davis, as well as assisting with characters and backgrounds for Ian Jones-Quartey and Jim Gisriel's web series nockFORCE prior to her career.[1]

In 2012, Cartoon Network green-lit Steven Universe, making her the first solo female cartoon creator in the network's twenty-one-year history. Rebecca was one of the main storyboard artists on Adventure Time until the fifth season, where she left to create Steven Universe, although she later returned again in 2015 for the Stakes miniseries to compose the song "Everything Stays" and voicing Marceline's mother.[2]

Rebecca was born in Silver Spring, Maryland and attended the Visual Arts Center at Einstein High School and Montgomery Blair High School simultaneously. Later, she would attend the School of Visual Arts in New York.[4] One of her early works, a comic strip entitled "Don't Cry for Me, I'm Already Dead"[5] about brothers who bond over references to The Simpsons, was a viral success.[6] The strip was originally published on Sugar's now-defunct website, SugarBoukas.com, itself a reference to one of her early animated shorts.[7]

She was hired as a storyboard revisionist during the first season of Adventure Time, and was later promoted to storyboard artist from that season on.

Rebecca would eventually leave Adventure Time in early 2013 to launch her new cartoon, Steven Universe. The final episode she worked on for Adventure Time, entitled "Simon and Marcy", was difficult for her, due to her working on the episode alongside launching her new show.[8] 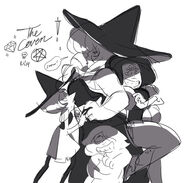 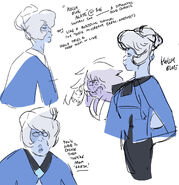 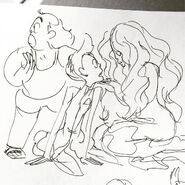 Poster from the Make-A-Wish Foundation. 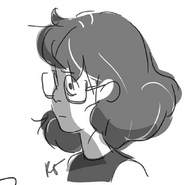 Retrieved from "https://steven-universe.fandom.com/wiki/Rebecca_Sugar?oldid=1669855"
Community content is available under CC-BY-SA unless otherwise noted.