Template:Red Eye The "Red Eye" was a meteor-like device that threatened Beach City in "Laser Light Cannon". In "Marble Madness", it is revealed that it was a device built and used by the Gem Homeworld to detect Earth-resident Gem life.

The Red Eye, as its name entails, is a massive, red-orange eye-like entity. As such, it is spherical in shape. The Red Eye has a light orange hexagonal iris with a red-orange, aperture-like "pupil" of the same shape. Its body (or sclera) is orange, and is covered by a cream colored covering (or eyelid) that can close and open to protect the eye. It seems to have the same triangular patterns that are shown on the floor of the Gem Warship, meaning that it belongs to the gem homeworld. This is confirmed when Peridot states that its purpose was to scout out other Gems on Earth. It seems to be constantly emitting light.

Although massive in size, it has the ability to defy Earth's gravitational pull, freely levitating. It is also highly durable, having a very hard body which provides great defense against physical attackers, as seen when it withstood multiple attacks without taking any sort of damage. Its aperture-like pupil/iris can open up and create a powerful vacuum.

Its first appearance is in "Laser Light Cannon", where it threatens Beach City with its potential of colliding with the Earth, which would likely kill all of Beach City's residents. Garnet, Amethyst, and Pearl try multiple times to stop it by throwing Amethyst at it, but find no success in doing so. It is implied that it cannot be destroyed without Rose Quartz's Laser Light Cannon, which Steven finds. He and the Gems use it to destroy the Red Eye, causing it to explode violently.

In "Marble Madness," Peridot revealed that the Red Eye was a scout sent to Earth by Gems, presumably to ascertain as to whether or not there were Gems present on Earth. 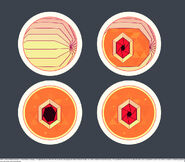 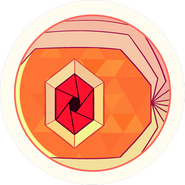 Retrieved from "https://steven-universe.fandom.com/wiki/Red_Eye?oldid=183803"
Community content is available under CC-BY-SA unless otherwise noted.