Rubies are common soldier Gems that were used by Homeworld, usually for bodyguarding. All Rubies shown so far, including the Crystal Gems' Ruby, have been voiced by Charlyne Yi.

Rubies are a type of soldier caste. Garnet describes them as "common", seeing as they are all originally identical to one another. They appear to be used as personal escorts and bodyguards for high-ranking Gems; typically Sapphires. Seeing as they are so numerous, inferred from Ruby's comment of there being "tons" of her, Rubies are considered somewhat unimportant and highly expendable grunts, though they compensate by fusing together into bigger constructs of themselves. Rubies are also sent to different planets to seek out specific Gems.

As common soldiers, Rubies are not very intelligent, having been easily fooled by Steven's claims that Jasper was on Neptune and Amethyst's obvious disguise as Jasper and according to Holly Blue Agate are seen as being incompetent or irresponsible. In The Steven Universe Podcast, Rebecca Sugar says the Rubies' main strength on Homeworld is their ability to combine; a Ruby would never be sent alone to do anything. Rubies are not supposed to have different personalities; the fact that they do "flies under the radar" because they act serious around higher-ranking Gems.[1]

Rubies are short in size with boxy body shapes and large square-shaped afro-like hair. While they can have slightly different shades of skin tone and hair color, they have no other real physical differences between them.

Most Homeworld Rubies serving Yellow Diamond wear the standard uniform, although the Rubies "Doc" and "Navy" is an exception. Some Homeworld Rubies wear very basic uniforms with no clear insignia on them, though so far no reason why this is has been given. 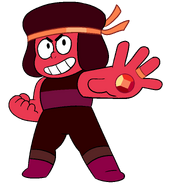 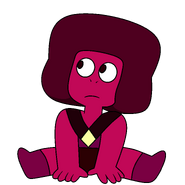 Two Rubies appear in Garnet's flashback in "The Answer". They were sent (along with the Crystal Gem Ruby) to Earth to escort Sapphire to Blue Diamond. They were poofed by Pearl, and their fates are unknown. They appear to be identical to the Crystal Gem Ruby and each other in appearance, clothing, and voice. Both Rubies seem to be obsessed with fighting.

One of Rhodonite's component Gems, who previously acted as a bodyguard to her Morganite before deciding to remain permanently fused with her owner's personal Pearl. Her gemstone is located on her navel. 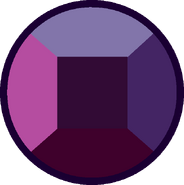 Her gem when fused as Rhodonite.

Concept art of Rhodonite's Ruby from Steven Universe: End of an Era.

The Rubies salute "Pink Diamond" (Steven), and many Sapphires appear later at the dance.

A Ruby can be seen from behind in the movie. Her gemstone is located on her back.

Three Rubies are shown in the opening credits as bodyguards for Nanefua Pizza. Interestingly, in Steven Universe Future, only two bodyguards appear. They wear dark gray suits and sunglasses, typical to how a human bodyguard would dress.

During "Little Homeschool", two Rubies can be seen running around as Steven gives Cherry Quartz a tour of Little Homeworld, and another is seen soon after attending Garnet's meditation lesson. The chest Ruby and meditation Ruby also appear in "Volleyball", this time accompanied by a third Ruby in a Yellow Diamond uniform. In "The Future", the meditation Ruby is briefly seen chasing Lemon Jade down the sidewalk.

A Ruby is one of the three playable characters from Soundtrack Attack, having fled Homeworld because she was done being a foot soldier.