Steven Universe Wiki
Register
Don't have an account?
Sign In
Advertisement
in: A to Z, Episodes, Season 3
English

"Same Old World" is the 3rd episode of the third season of Steven Universe and the 81st episode overall.

Steven flies around the world.[2]

The Crystal Gems are gathered next to the hole in the ground made by the drill, attentively listening to Peridot retelling the story of how Steven and her drilled down to the mantle and pacified the Cluster. Peridot notices that Steven is distracted. He is too busy worrying about Lapis Lazuli, who's resting inside the barn. Thus, he goes there to visit. Garnet follows, telling him that she needs rest from the strain of holding Malachite. He decides to leave afterward. However, as he sleeps right outside the barn, he wakes up from noises, and when he goes to check, Lapis woke up as well and is ready to set flight again. Steven is indignant, as he has not been able to settle down with her, but she claims she does not belong on Earth and leaves.

The next day, Steven is questioning Peridot on her decision to stay in the barn while the rest of the Crystal Gems move back to the Temple. However, as Peridot insists that she prefer the place, he leaves and approaches Greg, who has finished packing everything into the van, including the Gems, who are ready to go. Steven tells him to go on, as he wants to fetch Lion and ride on him to Beach City. However, in the process of searching for him, he finds Lapis instead, sitting miserably atop the barn's silo. He climbs up and questions why she has come back, to which she responds that due to her behavior towards Jasper, she would no longer be allowed on Homeworld, so she cannot go back and has nowhere to leave to. Steven suggests she lives somewhere on Earth and tells her he can show her around to help her find the best place to stay. Lapis accepts, and, with Steven holding tight to her back, glides from the silo's top into the open sky, as the barn gets smaller behind them.

They approach the fields in the countryside, and Steven introduces Lapis to the concept of trees, farming, and seasons, telling her that she could live a farmer's life and live among nature. Lapis is fascinated by the leaves, but still has doubts. Steven moves on and guides her into a metropolis environment, showing her Empire City and introducing her to urban life in Jersey. The area is incredibly polluted by smog, and the two are harassed by a local who throws a shoe at them. Lapis and Steven mock them, as they fly happily above the first layer of clouds, spinning, sprinting and doing tricks, including one where Lapis flips Steven, holding him by his hands this time.

When the clouds clear, Steven notices that they are deep into the sea and far from the coast, and wonders how far they are, however, something catches Lapis' eye: the Galaxy Warp. Memories from her past seem to come back to her, as she is immobilized by the structures, almost letting Steven slip from her hands. Luckily, she becomes lucid once more in time and lands on the platform, telling Steven that the Galaxy Warp is where she was abandoned. Raising the tides and summoning water that overflows over the warp pads, she uses her powers to transform the Homeworld Warp into a mirror, as she tells Steven about her past.

The mirror shows that Lapis was caught in the midst of the war between Crystal Gems and Homeworld Gems, for the planet Earth, while paying a short visit, and that in the middle of a battle, was punched by a soldier and poofed. Her gemstone was later found by Homeworld soldiers, who assumed she was part of the rebelling forces and imprisoned her in a mirror so that she would be immobilized while taking advantage of her captivity, requesting answers to questions regardings the Crystal Gems' leader and locations. However, Lapis was unable to answer back, for she knew nothing. Eventually, at the end of the war, the Homeworld Gems decided to retreat and return home. However, in the chaos of the evacuation, Lapis' mirror was dropped, and her gemstone was stepped on and cracked, condemned to stay forever in the Galaxy Warp, facing up towards Homeworld, for ages until she was eventually found and taken by Pearl.

Lapis' memories cause her to have a breakdown, as she stops with the magic and falls to her knees. Steven becomes worried, but Lapis decides that it be best for both if they return home. On the journey back home, Lapis is still feeling sad about always being a prisoner, now to Earth, but Steven tells her that she is not a prisoner and that the planet has changed, so her definition of home might just change too if she gives it a try. Once they are back at the barn, Lapis accepts Steven's request and decides that she would be willing to give Earth another opportunity. However, the two are interrupted by a nosy Peridot, who comes in to check on the two, much to Lapis' shock. Peridot explains that the Barn is also her new home, but Lapis is not having it because she thinks that the Barn is her new home, not Peridot's. The two turn back to a distressed Steven, who is not quite sure what to do. 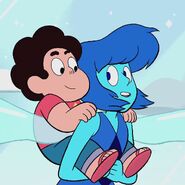