Season 2 is the second season of the television program Steven Universe. The season premiered on March 13, 2015, beginning with the episode "Full Disclosure". New characters were introduced over the course of the season. Because of the "StevenBomb" event, to satisfy the criteria of "a week full of new episodes," four episodes were moved from season 1 and were subsequently aired during season 2. Those episodes are "Open Book", "Say Uncle", "Story for Steven" and "Shirt Club".

Season 2 went on a summer hiatus after "Reformed" on April 30,[1] and returned with a second StevenBomb, beginning with "Sworn to the Sword", running from June 15 to June 19. The third StevenBomb (called "Week of Sardonyx") aired starting with the first episode called "Cry for Help" on July 13 and ending with "Friend Ship" on July 17, marking the end of a short hiatus and the beginning of another one. New weekly episodes were planned to return in August,[2] but got pushed back to September 10[3] due to unspecified "boring production reasons."[4] After six weeks of new episodes, the show went on a winter hiatus on October 15, 2015, and returned January 4, 2016, with a StevenBomb starting with "The Answer" and ending with "Log Date 7 15 2" on January 8, 2016.

Season 2 and Season 3 were originally planned as two halves of a 52 episode season, however on March 30, 2016, it was confirmed that there was a change of plans, and seasons 2 onwards will have just 26 episodes instead of 52, making the first half (episodes 53-78) the second season, with "Log Date 7 15 2" as the season 2 finale, while the second half, episodes 79-104, were reclassified as Season 3. 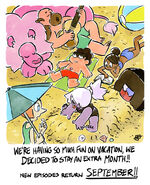 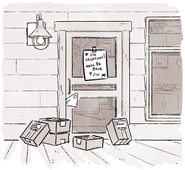 September episodes announcement promo.
Add a photo to this gallery