Season 5 is the fifth and final season of the main Steven Universe series.[1] There are 32 episodes in the season.

On June 18, 2018, Cartoon Network's YouTube channel released a trailer for the next five-episode arc, "Heart of the Crystal Gems," with confirmation that it would begin airing on July 2, 2018.[6] On July 21, 2018, during the Steven Universe panel at San Diego Comic-Con, the episode "Legs From Here to Homeworld" was shown early in full to panel attendees, and was released on the Cartoon Network app the next day.

On November 19, 2018, the Cartoon Network twitter announced a special event titled Diamond Days that would begin airing on December 17, 2018, with new episodes premiering weekly starting with the TV broadcast of "Legs From Here to Homeworld".[7] The season ended on January 21, 2019 with the 44 minute special, "Change Your Mind".

Friendships are tested as the saga continues in this Emmy-nominated series, created by Rebecca Sugar. The show returns with new adventurous story arcs and specials, in which fans will meet more Gems, spend time with the Diamonds and gain insight into the ever-mysterious Gem Homeworld while the series' titular hero Steven Universe will grow as a leader.[8] 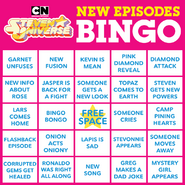 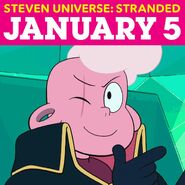 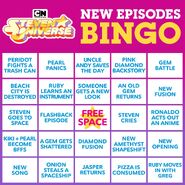 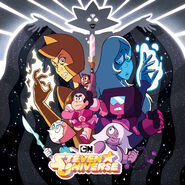 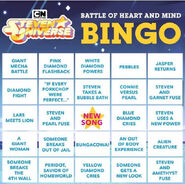 "Change Your Mind" bingo
Add a photo to this gallery